Akuma is muscular and tan-skinned with red hair tied in a small top knot, sharp pointed teeth and crimson eyes. He wears prayer beads around his neck, and the "heaven" (天, ten) kanji is typically seen on the back of his outfits. This kanji is featured frequently in Akuma's appearance, most often at the end of a Raging Demon attack, where it burns itself onto the back of his gi top.

Akuma wears a dark gray karate gi, similar in style to those worn by both Ryu and Ken. He either wears brown training gauntlets or wraps his hands with white rope, brown sandals and wears his deceased master Goutetsu's prayer beads around his neck, with a black "heaven" (天, ten) kanji visible on the center bead.

Akuma's Swap Costume is Heihachi's Player 1 outfit from Tekken 4, which is a white modified fundoshi along with both the hand and foot wraps and the rope from his primary outfit. Akuma's hair also gains extra white spikes on each sides of his head.

This outfit later became one of his customizations in Tekken 7: Fated Retribution.

Akuma wears his primary outfit and gains dark brown genji armor and greaves, decorated with two red lines running down each side, to cover his karate gi. He also has two flags decorated with demonic symbols on each side. He also wears a black half-mask to cover his mouth and white and red wristbands with a brown trim to match his outfit. He no longer wears sandals, instead fighting barefoot while wearing this outfit.

Akuma's Alternate Costume.
Add a photo to this gallery

A palette swap of his Player 1 outfit, Akuma's gi is now scarlet red and the wraps around his hands are now brown instead of white. 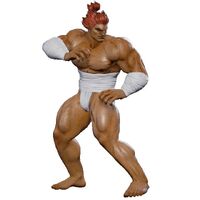 Akuma's fundoshi.
Add a photo to this gallery

His gi becomes a faded dark blue like in his crossover appearances, such as both Street Fighter X Tekken and SNK vs. Capcom: SVC Chaos. (2-Star) 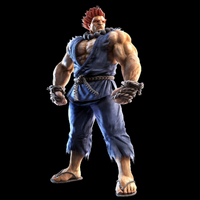 Akuma's 4-Star outfit.
Add a photo to this gallery
Retrieved from "https://tekken.fandom.com/wiki/Akuma/Outfits?oldid=123675"
Community content is available under CC-BY-SA unless otherwise noted.