Arcade Mode is a game mode in the Tekken series of games. Arcade Mode represents the Arcade version of a Tekken game, but with FMVs awarded to the player after winning (the original Arcade versions only had a "You are the Champion" screen, showing replays of each winning move).

Unlike Time Attack, another Tekken game mode, this mode's rounds and time limit can be modified to the player's liking.

Since Tekken 4, this mode was renamed Story Mode, and that Arcade mode was from then on quite literally the arcade version of the platform game. Regardless, this article will deal strictly with the mode named in-game as "Arcade mode", despite the name and mode change.

In the first installment of the series, the player fights through nine stages. The first seven are against random characters, the eighth is against the character's sub-boss, and the ninth is against Heihachi Mishima, the "boss" of the game. After defeating Heihachi, the character's ending plays and their sub-boss is unlocked for play. Clearing the game without using continues unlocks Heihachi.

Time records are saved in this mode, with the player entering their initials at the end of the game if a record is broken. Unlike later games, the same character can have multiple time records in the 16 positions available, whereas in later games, the time records were character-specific. If the number of rounds setting is a value other than 2, a small number will be added to the right of time record denoting the number of rounds played, for example, 1'23"451 if the game was set to 1-round matches.

When playing the game as Heihachi, the player will face all the sub-bosses, followed by Kazuya Mishima in his Devil outfit as the boss.

Only the eight default characters have ending videos; completing the game with a sub-boss or Heihachi will go straight to the game's staff roll.

The player fights ten stages, as opposed to nine in the first Tekken game. The first seven stages are randomly selected fights against seven of the other initially available characters, while the last three stages are set. Stage 8 is against the character's sub-boss, stage 9 is against Kazuya Mishima, and stage 10 is against Devil after Kazuya transforms into him. After clearing this mode, the ending is shown and the player's fighter's sub-boss is unlocked. Kazuya can be unlocked by clearing Arcade with one of the sub-bosses after all of them have become playable, and Devil/Angel by clearing Arcade mode with Kazuya. Unlike the previous game, time records are no longer saved in this mode, an additional Time Attack mode was created specifically for this purpose.

There are some exceptions to the statements mentioned above:

Very much like Tekken 2, but there are some differences. Unlike the previous games, there is no rival sub-boss to defeat on stage 8. The player faces random opponents on the first 8 stages, then Heihachi Mishima on stage 9 (with the exception of Heihachi, who faces Jin Kazama instead of himself), and Ogre on stage 10. After winning the first round against Ogre, he transforms into True Ogre. Even if the game options are set to only one round, both Ogre and True Ogre are fought.

Unlocking a character is no longer connected with what character clears Arcade mode, meaning characters are unlocked in a specific order. This order is:

The first time players clear Arcade, they will unlock Kuma. The second, Julia, etc. Each time they have to go through Arcade Mode with a different character, chosen from those available from the start. Along with True Ogre, they gain Theater and Tekken Ball modes. When characters become unlocked, they are added to the CPU roster, randomly appearing from stage 4 to stage 8 (with the exception of Heihachi, Ogre and True Ogre, which are always on the final two stages). Gon and Doctor Bosconovitch are also added to the CPU roster once they are unlocked in their respective game modes, Tekken Ball and Tekken Force.

In Tekken 4, what was formerly known as "Arcade mode" changed its name to "Story mode", a name which has remained in all later installments of the Tekken series. The "new" Arcade mode was quite simply the arcade version of Tekken 4, and only served a function similar to Time Attack Mode, but with changeable options, such as round time, difficulty, etc., and nothing could be unlocked from playing it.

In Arcade mode, the player fights an unlimited number of AI characters for money and rank. The rank of the character used, compared to the rank of the opponent, decides the amount of money earned. The higher the rank of the AI, the more difficult it will be to defeat.

The ranks in Arcade mode are as followed: 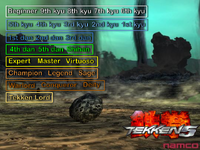 Ranking giving promotions or demotions through winning or losing fights, respectively. However, when these promotion/demotion chance fights occur, it is decided on a point system. The player needs 3 points to be promoted, and -3 points to be demoted. How many points a player gets for a win is calculated as 1/(1 + x), "x" being the difference in ranks between the player and the opponent, meaning that fighting against much stronger opponents will not help the player gain ranks (they will earn more money though).

One thing to note is that a promotion chance will occur if the win of a fight will bring the player up to 3 points or above, so it is not required to have three points already. The same applies to demotions.

The actual amount earned in Arcade Mode is 800G-4000G. The amount earned is determined by which level the CPU opponent the player defeated is ranked.

All ranks return from Tekken 5 with the exception of Conqueror and the addition of 12 new ranks.

In the PS3 version, Arcade Mode has 9 stages. The Fight Money is determined by the performance in the match under the criteria, Stage Bonus, Time Bonus, Health Bonus and Special Bonus.

Tekken 6's arcade mode is identical to the arcade version of it, Tekken 6: Bloodline Rebellion, except playing online is required to get past the 1st dan rank. The ranks are divided into Color Groups.

There are six randomly selected ghost fights depending on the player's offline rank, there are three boss fights. In the 7th round, the fighters go against the tag team of Heihachi Mishima and Jinpachi Mishima. After, they face off against True Ogre, upon winning they reach the final round against Jun Kazama. Beating Jun will have her change into Unknown who will serve as the final boss in the second round. After, the character's ending is unlocked.

In Tekken 7, arcade mode reverts back to a similar format of the earlier installments. However, the player only faces five opponents. Three of them are randomly selected fighters, while round 4 is Heihachi Mishima in the Mishima Dojo. After defeating Heihachi, Kazumi Mishima or Akuma will be fought. If Kazumi is fought, and the player wins the first round (although if the player loses a round, she will remain until beaten), Kazumi will change into her devil form.