Cathedral is a stage in Tekken 5. It is a cathedral with red-orange stained glass windows.

Blue-flamed torches and a statue of a demonic creature with wings wielding a sword can also be seen. The demonic creature appears to be standing over Cerberus (mythical three-headed dog). Gates and walls surround the fighters.

The stage BGM is titled "Antares". 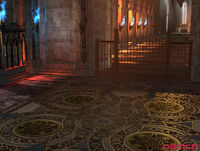 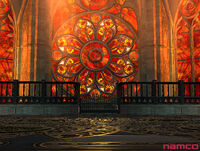 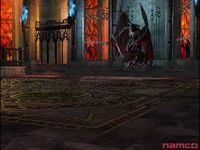 The statue of a demonic creature with wings resembling Devil Jin wielding a sword standing over a mythical three-headed dog.

Kazuya vs Kazuya.
Add a photo to this gallery

Retrieved from "https://tekken.fandom.com/wiki/Cathedral?oldid=127212"
Community content is available under CC-BY-SA unless otherwise noted.