Crow is a rank within Tekken Force, the private military of the Mishima Zaibatsu. It is thus refers to several characters in the Tekken series. Crow, as a single person, appears in Tekken Card Challenge, a non-canonical Tekken game. All that is known of them is their rank and no name is given. In Tekken 3's Tekken Force (Mode), Crows were revealed to be the lowest rank within Tekken Force, with higher ranks being Hawk, Falcon, and then Owl.

Crow, along with other soldiers, appears as an enemy character in Tekken Force Mode. Crow can also be made playable via a third-party cheat device in Tekken 3 alongside every other enemy character.

In Tekken Bowl, if the player scores a Strike. The two characters will cheer and, in the background, there will be a number of Crows clapping, with and without guns, cheering for the player who got a strike.

Variations of Crows in different colors appear in Tekken Tag Tournament 2's Fight Lab Mode as opponents for Combot to fight in order to complete each stage. They serve as a non-playable character, much like they did in Tekken 3's Tekken Force mode.

Crow Playable via a Cheat Device. 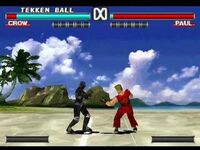 Crow in Tekken Ball mode as a playable character.

Crow in Tekken Force mode as a playable character.

Crows applauding for the strike in Tekken Tag's Tekken Bowl.

Bryan customized as Crow in Tekken 6.