Customize is a mode where the player can customize each of the character's costumes separately also with additional items. The customization system started in Tekken 5 and has returned for all subsequent installments. Players can buy customization items for their character with fight money. The fight money is also called "G". Players can earn fight money by doing many battles as they can in different modes.

As of Tekken 6, fight money can also be earned from winning online matches. It offers a mass option in customization for characters and plays a part in the cosplay aspect with its various decisions. The players can change their costumes within tops, gloves, bottoms and footwear.

In Tekken Tag Tournament 2, fight money can be doubled or tripled due to lucky boxes being received after an online victory. On offline mode, special customization items can be unlocked while playing ghost matches. This game is also said to have one of the better customization, similar to Tekken 6, based on the details. Starting from this game onward, their tops and gloves as well as their bottoms and footwear are now combined into one set.

There is also some form of a customization mode in Tekken 3D: Prime Edition; however, this mode is only enabled after a certain rank is sustained. Moreover, they're more like palette swaps of their default outfits.

In Tekken Revolution, there are virtually no customization options. Instead, there are outfits for each character that are also palette swaps of most of their customization from TTT2. Unfortunately, they must be purchased via PlayStation Network.

In Tekken 7, the customization isn't as detailed as Tekken 6 and TTT2, not as many clothing options and hairstyles, but still offers a similar setup. Previous fighters' outfits can be bought and unique outfits unlocked for new characters. Some costumes for each character in the customization mode needs to be unlocked using Treasure Mode or Tournament including the Rainbow Hairstyle. The male characters can wear cargo shorts or tight fitted shorts to be customized by the players just show off their well-toned legs. They can also change the color of the player's chosen customization outfits. 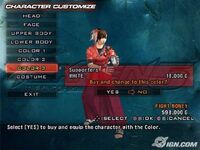 Customization for Lili in TTT2.

A close-up of Jin in a rough beard customization

Retrieved from "https://tekken.fandom.com/wiki/Customize?oldid=146115"
Community content is available under CC-BY-SA unless otherwise noted.