Everything that he knows[1]

Doctor Bosconovitch (ドクター・ボスコノビッチ, Dokutā Bosukonobicchi?, in Russian: Доктор Босконович), also referred to as Doctor B., is a character in the Tekken series. He first appears in Tekken 2 in Yoshimitsu's ending. His first playable appearance was in Tekken 3 where he is one of the two playable bonus characters (Gon being the other one). Doctor Bosconovitch later appears non-playable in many other games in the series. After a 15 year hiatus, he finally returned as a playable character in Tekken Tag Tournament 2.

Doctor Bosconovitch is a polite, well-mannered man with no ill will toward anyone, aside from most of the Mishima bloodline (Jin Kazama not withstanding). He is desperate in his attempts to revive his daughter, Alisa and even created an android in her likeness. Despite not having any fighting prowess, he is still willing to help in the fight against the Mishima Zaibatsu through either info, or actively participating in the King of Iron Fist Tournament. He openly detests his scoliosis and finds it fairly frustrating to deal with as it worsens with his age.

Doctor Bosconovitch is a tall, frail, elderly man with a balding head of white hair and blue eyes. He also wears reading spectacles and is typically seen wearing lab coats over smart suits, adorned with a bright orange tie. He also has 2 golden plated teeth, one of his top incisors and the other is the bottom second premolar.

Doctor Bosconovitch was kidnapped by Kazuya Mishima in the run-up to the King of Iron Fist Tournament 2 and was forced to work for him. Some of the many projects involved the creation of the bio-weapons Roger and Alex, as well as the repairing of the Prototype Jack unit. After completing his tasks, and before being executed, Doctor Bosconovitch is rescued by the friend he helped save previously, Yoshimitsu.

Doctor Bosconovitch was a leading scientist of the former USSR. At the age of 12, he designed a new type of ballistic missile, and instantly became famous in the scientific world. After losing his own daughter, Alisa, Bosconovitch has been doing research on human resurrections and cold-sleep machines. Through these experiments, he became active in cloning and the creation of androids, such as Jack.

With no sense of good or evil, he works only to somehow revive Alisa.

Before the second King of Iron Fist tournament, he was captured by Kazuya Mishima and was forced to do genetic research pertaining to martial artists. However, he was also able to create a new type of cold-sleep machine. He is responsible for saving Yoshimitsu from death, and Bosconovitch himself was also saved from the Mishimas' by Yoshimitsu.

Now, Bosconovitch is infected with a mysterious disease. In order to cure himself and to revive his daughter, he needs the blood of the Fighting God. He is the only man in the world who knows the truth behind the mysterious fighting god in this tournament.

Ending Description: A bubbling green substance is shown in a jar labelled "Ogre's Blood". Yoshimitsu is shown looking at a rat in a cage. Next, it is revealed that Doctor Bosconovitch is beside him. They are apparently testing Ogre's blood on the rat. The rat starts to drink it. Yoshimitsu and Doctor Bosconovitch turn their heads and look at each other. After a few seconds, they go back to watching the rat drink Ogre's blood. The rat turns its face so that it is facing the screen. Dramatic music starts playing. Yoshimitsu is shown running out of the building while holding Doctor Bosconovitch under one of his arms. The rat, now gigantic, bursts through the building.

Doctor Bosconovitch appears in Bryan Fury's Tekken 4 ending. In it, he explains to Bryan how he needs to get access to his cybernetic body since he believes it is the key to defeating a "bioweapon" of Bryan's creator, Dr. Abel. In return, he will fully mechanize Bryan and allow him to be completely reborn in a new body, prolonging his life in the process. Bryan lays supine on the table and Bosconovitch holds a gun-shaped device containing sleeping gas. Bidding him sweet dreams, he injects the gas into Bryan. Throughout, he speaks in a very gentle, paternal tone and is very calm.

While breaking into the Mishima Zaibatsu's vault, Yoshimitsu found an injured Bryan Fury, and he brought him to Doctor Bosconovitch. Bryan entrusts the doctor with giving him a "perfect" body. However, the doctor found Bryan's body too complex, and he instead installed a perpetual generator. Bryan proceeded to attack the doctor, as well as Manji Clan members who were with him. He did survive the attack but was severely hurt. When Yoshimitsu arrived to visit Doctor Bosconovitch, he finds the lab in ruins, and his comrades dead. Seeing this, Yoshimitsu vowed vengeance on Bryan, so he entered The King of Iron Fist Tournament 5.

Deep within a lush and thriving forest lies a heavily defended research facility. This facility was a research institute named after its director, Bosconovitch. This facility was very important, as it was here that the Mishima Financial Group's most sensitive military equipment was developed.

Located at the core of the research center was a room that kept its most prized possession: a clear capsule, in which a young girl slept soundly. Her name: Alisa Bosconovitch. She was created by Doctor Bosconovitch and designed to serve Jin Kazama. 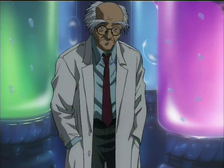 While not a playable character in Tekken Tag Tournament, Doctor Bosconovitch can be seen in the crowd of people cheering in the mini-game, Tekken Bowl. It is even possible to "take him out" using a bowling ball.

He was originally meant to appear in Tekken Tag Tournament along with Dr. Abel, Marshall Law, and Devil Kazuya (He is referred to as Devil, but not as Devil Kazuya which was unused). As there were unused announcer voices in the arcade version but they (except Devil) weren't added to the final version.

Although he does not appear in person in Death by Degrees, Nina's spin-off game, he is mentioned several times in journals and documents, and he has a laboratory on the Solitaria Penitentiary island, although it's abandoned. In Lukas' journal, Lukas shows resentment towards Bosconovitch, as Bosconovitch gets all the attention and they are shutting Lukas down, and he takes "that souvenir Bosconovitch left behind" to aid him in his plans to make the people that shut him down pay. Bosconovitch is the creator of Type J and the J Robots. Inside his locker in his laboratory is a document titled "Type J" report, detailing testing of Type J's abilities. In it, it states that the cranial area fell short of specified modifications, due to an emphasis on weight reduction, so a strong shock to the cranial area places great stress on the sensors. In the worst-case scenario, the A.I. unit could be destroyed. "Therefore it is of utmost importance that we implement a fix at once...".

In Tekken Tag Tournament HD, he returned again as an onlooker in the crowd of Tekken Bowl. There is also a trophy named after him called "Doctor B!" with the description being "K.O. an onlooker in Tekken Bowl." with an icon of Bryan as the picture (probably because he attacked him in Tekken 5).

The player must move the aim all the way to the left on Dr. B. Once the ball is thrown with a successful hit onto Dr. B, it will say "< K.O.", pointing where he got K.O.'ed, although it is never shown, but implies he did. Along with a message that says "Caution: Please do not try this at home." (this message also shows when a player overcharges the meter of the bowling ball), with the Trophy being unlocked.

Ending Description: Dr. B is engaging actively in analysis research testing the devil gene present in the blood samples of Jin and Kazuya to compare the results to Lars. The results show that since Heihachi and Jinpachi are related to Lars, it's quite possible that Lars will develop baldness very early between his 20's and 50's due to not inheriting the Devil Gene. Jin and Kazuya both contain the Devil Gene, so therefore baldness is not a likely occurrence. After Bosconovitch makes this remarkable discovery, the screen changes to a scene of Lars and his teammates flying in a helicopter that has a side window open. Lars politely asks one of his teammates to close the window, alluding to he could feel a light breeze through his hair, hinting towards baldness even earlier than expected.

In Tekken 3, Doctor Bosconivitch mostly used moves taken from other fighters to make a unique mash-up fighter, while also tending to fall over after combos or specific moves due to his scoliosis.

In Tekken Tag Tournament 2, the doctor has a dedicated moveset that displays his lack of fighting prowess and showcases his back condition even further. Dr. Bosconovitch plays as a slow, but surprisingly powerful fighter; he relies on follow-ups from his unique stances such as Mad Pain or Electric Charge, and usage of hard-hitting yet easy to initiate combos. The doctor employs the use of small remote bombs which he keeps in his pockets; they can be used to steady himself or propel him into the air to aid in dodging or heavy attacks. With the use of Electric Charge, Dr. Bosconovitch also owns the longest active unblockable move in the game, Parallel Lightning Spark, that can push opponents far and away from him if they decide to stand and attempt to block. For utility, a fair amount of the doctor's moves cause him to lose balance and double as a psuedo-feint. The move, Surprise Tumble can also force a fall and be used to psych out opponents or bait them into an attempt at punishing. Despite their slugish nature, his moves and basic juggles can do exorbitant amounts of damage if the player is brave enough to throw them out, hoping to counterattack and risking counterattack themselves.

One must play the Doctor fairly carefully, as his moves have some of the worst frame data in the Tekken series to date, with his quickest move being slightly slower than the universal leg swing kick. He also has a lack of ranged attacks, his farthest ranged move being Bomb Sweep, which causes him to slide along the ground underneath his opponent with high ending lag and is laughably easy to punish if blocked.

Bosonovitch is best played in a conservatively defensive style, waiting for his opponents to overextend and then double down on powerful Mad Pain combos and Zen finishers. His effectiveness is best utilized with a tag partner that can cover his major weaknesses. Competitively, he is most commonly used to extend combos with his powerful attacks to keep the opponent in the air for longer, or punish characters who rely on using low sweeping tools.

Dr. Bosconovitch does not necessarily have a fighting style. He simply uses what little knowledge he knows about fighting and attempts to attack with a severe absence of training. His innate lack of balance from being a frail, old man and his continuous problem with scoliosis attributes to this, as he tends to fall over or stumble when attacking. He also lacks pain dicipline and instinctively reaches for and tends to areas where he is hurt, like in his 'fighting' stance, Mad Pain. He has adopted a fighting stance similar to Yoshimitsu's Meditation stance, named "Zen", which he uses in tandem with his remote bombs to propel himself around the arena and charge into opponents with. The doctor also uses the famous Russian dance, the Cossack Kick as a form of airborne attack and uses static electricity to catch oppenents off guard, which is surprisingly effective.

Retrieved from "https://tekken.fandom.com/wiki/Doctor_Bosconovitch?oldid=127697"
Community content is available under CC-BY-SA unless otherwise noted.