Dragon's Nest is a stage in Tekken 5. It is located notably high in the clouds. A long dragon statue clutching an orb surrounds the area. Some boulders and lit flames are also in some parts of the stage. Another dragon statue can be seen surrounding another mountain that is far away. There can be a bridge seen on the other mountain.

The characters with interludes in this stage are:

The stage BGM is titled "Those Who Go To Heaven". 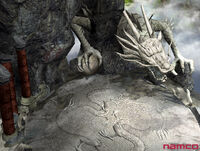 Overview of the dragon statue clutching an orb. 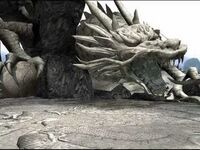 Close up on the giant head of the dragon statue.
Add a photo to this gallery

Retrieved from "https://tekken.fandom.com/wiki/Dragon%27s_Nest?oldid=126419"
Community content is available under CC-BY-SA unless otherwise noted.