Murdered by Kazuya Mishima before the events of Tekken 6.

Emma Kliesen (エマ・クリーゼン, Ema Kurīzen?) is a minor character in the Tekken series. She is Leo's mother and was killed by Kazuya Mishima prior to the events of Tekken 6.

In Leo's Tekken Tag Tournament 2 ending, it is revealed that Emma once worked for the Mishima Zaibatsu. In Steve Fox's ending in said game, Emma is revealed to have been a scientist put in charge of observing Steve (or, as the other scientists insisted on calling him, Subject NT01). She was the only one to relate to him as a human boy rather than an experimental subject, but was admonished by her superiors for unprofessional behavior and relocated. Nonetheless, she was still able to help Steve by declaring NT01 dead at the age of 6 while, in reality, he had been transferred to an orphanage.

In Steve Fox's ending in Tekken 7, Emma was mentioned by Steve, who referred to her as Dr. Kliesen, when he finally interrogated his biological mother Nina Williams. Nina explains to him that the Mishima Zaibatsu were trying to create supersoldiers through genetic engineering, and that he was created using her genes. While the experiments were unsuccessful, Steve was one of the survivors. At some point after these experiments, Emma left the Zaibatsu and joined the G Corporation, until she was killed by Kazuya Mishima; the exact nature of her murder was undisclosed. 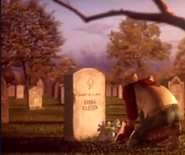 Close-up of Emma before she leaves.

Young Steve Fox pleading with Emma not to leave him.
Add a photo to this gallery

Retrieved from "https://tekken.fandom.com/wiki/Emma_Kliesen?oldid=116553"
Community content is available under CC-BY-SA unless otherwise noted.