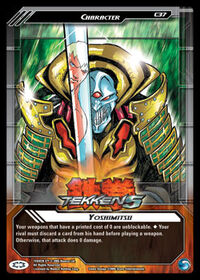 Epic Battles Trading Cards are an out-of-print collectible card game produced by Score Entertainment and released in September 2005. The gameplay attempted to imitate a traditional fighting game experience through cards, similar to the Pokemon cards. It features characters from several different franchises like Tekken.

The game is divided into turns of five steps. Unlike most collectible card games, players may take any action on any turn. The goal of the game is to damage the rival players with attacks, forcing them to discard cards from their deck. When a player runs out of cards, they lose the game.

Character - A card which represents the combatant whose role the player is currently assuming. Character cards may also have special abilities attached to them. Any attack that names a character can only be played if the player is using that character.

Attack - Attacks are the most common type of card. Attack cards have an archetype, either High Attack or Low Attack, and then a subtype, which can include Punch, Kick, Throw, Projectile, Weapon, Special, or even Bite.

Blocks - Blocks are played to prevent (or reduce) the amount of damage from attacks. Some have energy costs and special abilities, but not all.

Events - Events are random things that may happen in a fight. They are initially played face-down and are turned over and played when the requirements on the card are met.

Retrieved from "https://tekken.fandom.com/wiki/Epic_Battle_Trading_Cards?oldid=124462"
Community content is available under CC-BY-SA unless otherwise noted.