Killed by the hands of Feng Wei.

Tekken 5
Feng's Master is a minor, unnamed, non-playable character in the Tekken series. He first appeared in Tekken 5 as the master of Feng Wei, whom he taught traditional Chinese martial arts.

The unnamed sifu of God Fist Style Chinese Martial Arts, who taught this art to one of his pupils, Feng Wei. He was killed by Feng after having scolded him for fighting outside of school grounds.

Wang Jinrei stated that, if Feng's master died in fair combat against his disciple, he must have intended to do so. Thus, he said, the fight was an honourable one and Feng should not be condemned.[1] 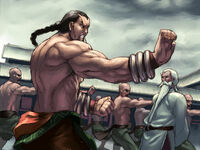 Feng Wei trains before his master. 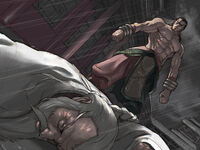 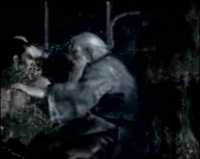 Feng Wei (on the left) attacking his master (on the right).