Final Stage is a stage in Tekken 5. This stage is where every character will have the boss fight against Jinpachi Mishima. All characters have at least one interlude (Devil Jin has two) in this stage.

Its appearance can be mostly described as a wasteland; The background is filled with tall, smoky tornadoes in front of hills and big boulders being blown across the ground. The area is mostly gray with thick smoke and ash. The sky is green with many ominous clouds in the sky. From a far distance, a temple and a waterfall can be seen.

The stage BGM is called "The Finalizer". 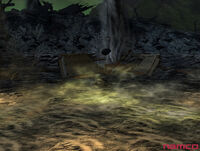