Fireworks Over Barcelona is a stage featured in Tekken Tag Tournament 2 as free DLC and in Tekken Revolution. The stage takes place in a cabaret bar at nighttime in Barcelona, Spain.

It features a minibar to the left, with entertainment such as two women dancing in the traditional Flamenco style accompanied by a few male flamenco guitarists on the stage platform and a seating area to the right.

At the back end of the tavern, there is a balcony that leads to the bottom portion of the stage. On the lower level of the stage, fireworks fill the night sky, again as the stage name suggests. Several lit-up buildings, the famous monument Sagrada Familia and flowerbeds surround the stage and the sign "Rosa Flamenco" can be seen on the main flowerbed. 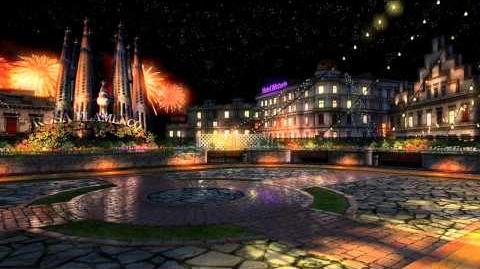 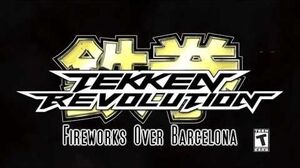 View from the side (note the two Spain flags hanging above the two sections of the dining area).

Main flowerbed on the lower level displaying fireworks in the sky.
Add a photo to this gallery

Retrieved from "https://tekken.fandom.com/wiki/Fireworks_Over_Barcelona?oldid=126466"
Community content is available under CC-BY-SA unless otherwise noted.