GENOCELL was the name of a forest rejuvenation project lead by a team of scientists and researcher. The head researcher was Professor T and one of his team was Julia Chang. GENOCELL has biological purifying qualities that seem to stimulate biological growth. The main purpose of GENOCELL was to reforest deserts in Julia's home state of Arizona. It was funded and supervised by G Corporation and its data was located in one of the G Corporation's maximum security labs.

After discovering that her homeland was in danger of desertification as a result of rapid global climate change, Julia began researching ecosystem reforestation. She joined an advanced genetic research group, led by Professor T, that studied the biological mechanism of reforestation. The project was called GENOCELL, and the grant for the research came from G Corporation. G Corporation's supercomputers, located at their high security research center, were being used for the research, and all of the research data was stored on their file servers. The research was completed but then put on indefinite hold. Despite the amount of security, the G Corp research center had been attacked by the Mishima Zaibatsu, who succeeded in stealing valuable data, including all of the GENOCELL reforestation data.[1]

GENOCELL data was then put to use in the Mishima Zaibatsu's Devil-Human Integration Program, where it was used to try and create devil-human hybrids. Julia entered the fourth tournament to try and recover the data, but was ultimately unable to recover her data.[2] During the fifth tournament however, likely with the help of Ganryu, Julia was able to recover the data she needed, and GENOCELL was successfully used to begin reforesting Arizona.[3] As of Tekken 7 Julia continues to self-fund her work through live-streaming, as she had to flee G Corporation after it was discovered that she was spying for Violet Systems.

The Mishima Zaibatsu used the GENOCELL research they had stolen to aid one of their own projects, the Devil-Human Integration Program, led by Doctor Abel.[4] In this project, they posited that devil cells from the Devil Gene existed. They intended to merge these devil cells with human cells in order to create a devil-human hybrid. When trying to merge the cells together, under normal circumstances, the devil cells destroyed the human cells, however, through the use of GENOCELL, the devil cells could be suppressed and the creation of a viable life form could be made possible. In her (non-canon) ending, Julia managed to delete all GENOCELL files, stopping this research, but also postponing the dream of saving her home in the process.

The Devil-Human Integration Program is likely canonically unsuccessful, since Heihachi Mishima was not able to secure either of the research subjects he wanted to progress this research: Kazuya Mishima and Jin Kazama both escaped his capture at the end of Tekken 4, and he has not been able to capture them since. With the death of Dr. Abel and Heihachi, it is likely that this project has been indefinitely halted. 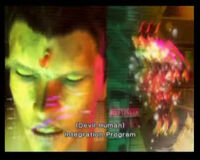 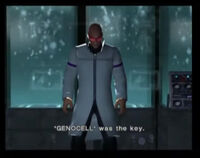 Dr. Abel revealing the use of GENOCELL in the Devil-Human Integration Program in Tekken 4. 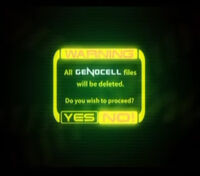 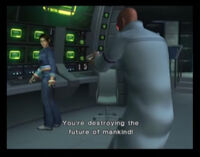 Julia prepares to delete GENOCELL rather than let it be used by Dr. Abel 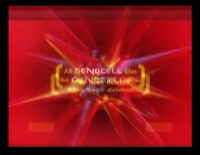 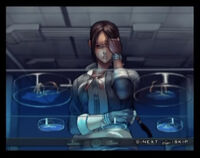 Early failures of GENOCELL in the Arizona desert in Tekken 5. 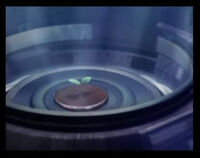 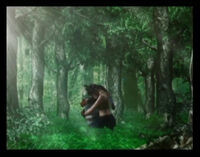 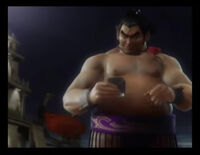 Ganryu gives Julia GENOCELL on a floppy disc in his Tekken 5 ending.