Heaven's Gate is a stage in Tekken 5: Dark Resurrection corresponding to Hell's Gate in Tekken 5. The differences between this stage and its Tekken 5 counterpart is that it is set up in the daytime and the area is less dilapidated.

The area does not feature tombstones anymore, but there are some urns. A bridge is in the background along with some cherry blossom (sakura) trees. The head of a Buddhist statue is seen behind the fighter on the left (like in the TK5 version) along with a Japanese gate resembling a Shinto torii gate in front of the fighters.

Behind the fighters, a stairway leads up to a statue of Buddha whose face can not be seen as it is emitting bright rays of light. On the other side of the gate, the bridge can be seen leading towards a mountain along with an ocean, red parasols and more cherry trees.

The stage BGM is titled "Into Nirvana".

Another view of the stage 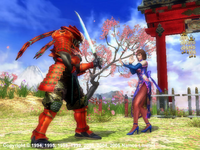 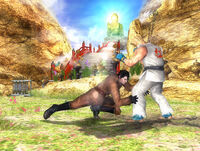 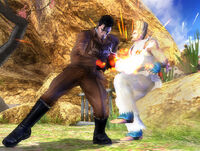 Dragunov striking Paul
Add a photo to this gallery

Retrieved from "https://tekken.fandom.com/wiki/Heaven%27s_Gate?oldid=127225"
Community content is available under CC-BY-SA unless otherwise noted.