J Robots are characters in Death by Degrees. They are robots that were all created by Doctor Bosconovitch. They are located on the Amphitrite. They are named "J Robots" because, like Type J, the letter "J" is inscribed on their abdomens. These robots are concealed in cases. These cases are unlocked with the non-contact type IC key that has the letter "J" inscribed on the handle. Three of these robots are on the Amphitrite.

They are some of the bosses that Nina Williams, the game's protagonist, must fight. After each robot is defeated, a crystal Xiangqi piece is obtained. The point of these pieces is to take them all to the captain's room and place them in the chess board. After doing this, another area will be revealed.

This J Robot is found in a room that has gray walls with black dots on them. There are also silver "X" designs on the walls. This J Robot is red, and it has an electrical arm. It usually attacks by electrocuting the cage that surrounds them. It will also attack by punching Nina, using quick "dash" attacks, using a ball and chain that is concealed in its other arm (the non-electrical arm), and spinning around with the ball and chain released. Nina will get hurt if she comes in contact with its electrical arm. After this J Robot is defeated, a crystal Xiangqi piece is obtained. The Chinese character for "soldier" is engraved on it.

This J Robot is found in a room that is revealed after playing the word "Orpheus" on the Amphitrite piano and entering the door that is revealed afterwards. This J robot has a camouflage design on it. It uses an eye beam and two blades that open and close like scissors. This J Robot can also run around the room pretty quickly, and Nina will get damaged is she comes in contact with the J Robot while he is doing this. After this J Robot is defeated, a crystal Xiangqi piece is obtained. The Chinese character for "horse" is engraved on it (this is also called a "Knight Piece"). 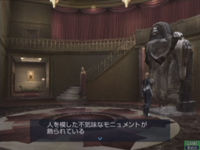 This J Robot is found in a room with two sets of stairs on the left and right sides of the J Robot's case. It is a gray robot that has two machine guns on its left and right sides. It usually attacks by firing its machine guns. It can also breathe fire and fire missiles. After this J Robot is defeated, a crystal Xiangqi piece is obtained. The Chinese character for "general" is engraved on it

Type J is a robot that was created by Doctor Boskonovitch and taken by Lukas Hayes as a part of his revenge against the people that shut him down. Type J is encountered at the Solitaria Penitentiary. It is named "Type J" because the letter "J" is inscribed on its abdomen.

Type J chases Lukas Hayes in the opening movie ;it is not seen but can be heard running, roaring, and watching Lukas from its tracking system. Lukas manages to escape, but only to be ambushed by Enrique Ortega and a bunch of armed men. Type J is next seen watching Anna Williams and Nina Williams fight on an old bridge. He jumps down onto the bridge and falls through it bringing Anna down. Anna falls on Lukas Hayes and they eventually fall on sandbags. Anna earlier knocked Lukas through the bridge, but he luckily got caught in ropes. Anna apparently flees and Lukas becomes Type J's new target.

Nina successfully guides Lukas through the tunnels to escape from Type J, but it attacks Nina after. Later, Alan Smithee shows up and activates a radiation device that weakens Type J on one side of the room. After Nina defeats Type J, it is hit with a huge blast of the radiation that almost destroys it. Alan and Nina goes to rescue Lukas from Enrique, but they couldn't get to Enrique's location until Type J comes back and smashes through the doors. Enrique is knocked out of the room and Lukas runs away to safety.

Nina confronts Enrique, but he warns her by saying she should worry about Type J instead. Enrique suggests that they be partners, but Nina refuses and fight him along with Type J. If Nina or Enrique come in contact with Type J, it will hurt them. Eventually during the fight, Type J will shut down and it is left at the Solitaria Penitentiary.

Retrieved from "https://tekken.fandom.com/wiki/J_Robots?oldid=106324"
Community content is available under CC-BY-SA unless otherwise noted.