Jeff Slater (ジェフ・スレーター, Jefu Surētā?) is the current Vale Tudo champion during the events of Tekken 4 who apparently used to watch all of Craig Marduk's fights on television, implying that he was a big fan of Marduk.

Going by first impressions, Slater seems to be a cocky and self-centered man with a huge ego, much like Marduk himself.

When Marduk went to an abandoned fight arena, during his Tekken 4 ending, Slater appeared and introduced himself, offering a handshake to which Marduk ignored. Slater changed his complimentary attitude and cockily challenged Marduk to a fight, saying that it will be the best unofficial bout ever and alluding to Marduk's expulsion in the wake of a scandal.

Marduk ignored him again and tried to leave, but was stopped in his tracks by Slater, who smugly accused him of running away and being scared of seeing "legendary fighter KO'ed in the headlines." Slater was eventually taken down by a single headbutt by Marduk, who proceeded to step on him as he left the arena after threatening him not to get up.

Slater fights using Vale Tudo. Vale Tudo is a fighting style that generally can be a mixture of any kind of fighting styles, ranging from wrestling, to Judo, to Sambo, to Muay Thai.

Slater is never seen in a fight so his form of Vale Tudo is unknown. However, since being the current Vale Tudo champion, he is more than likely a skillful and formidable practitioner in the form that he does use. 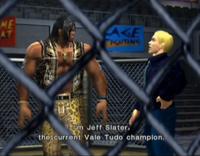 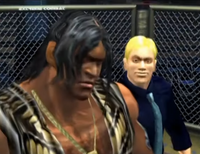 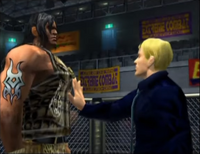 Jeff attempting to stop him 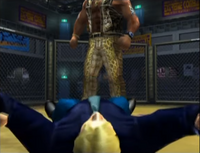 Jeff after getting knocked out by Marduk