Jin-A is the first stage of Jin Kazama in Tekken Tag Tournament. Its layout is based on Jin's Tekken 3 stage, Tiger Dojo Tokyo.

It takes place in a Japanese dojo, in a place in the mountains. It is possible to see the landscape outside where a thick fog covers the forest. The light of the moon dazzles the dojo. It is the night-time counterpart to his second stage, Jin-B.

A large traditional Japanese painting named nihonga covers part of the dojo where you can find a tiger and a leopard in front of a dragon. The design on the wall panels features that of tigers, paying a homage directly to his original stage. 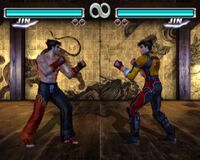