Katsuhiro Harada (原田 勝弘, Harada Katsuhiro?, born June 10, 1970) is a producer with Bandai Namco. He is best known for his work on the Tekken fighting games series of which he is the director and chief producer of. He was also a member of Project Soul (the team behind Namco's Soul Calibur franchise).

Harada was born in Osaka, Japan and grew up in Nara Prefecture, the youngest of three children. He has two older sisters and his parents were civil servants. His parents saw him as the hope of the family and to act as a role model, he was not allowed to play video games. It was, however, something that interested him. He often went to play his favorite video games in arcades.

He attended Waseda University in the late 1980s, along with Dead or Alive creator Tomonobu Itagaki.[1] He holds a degree in psychology.[2]

During this time, he spent most of his time playing video games and was convinced that his future lied there. He finds work in an arcade owned by Namco, located in Shinjuku in Tokyo. He mainly organized Street Fighter II tournaments. Through his studies in psychology, Harada studied the behavior of players in the arcade. He then made changes to the premises in order to observe the reactions of the people. He spoke with them and collected feedback. Namco's president at the time, commended Harada's work. Harada then encouraged Namco to work on producing video games for home consoles, having acquired some knowledge in that field. He later moved to Tokyo after completing his university studies there and eventually became a game designer.[3]

Harada started as the advisory consultant of the first Tekken. For Harada, the fighting game needed to reach not only Japanese arcade players but also the general public, so that everyone could play it. Harada wanted Namco to make Tekken an console game for everyone. Although now, Harada somewhat regrets it because the game was not balanced enough (some characters were more powerful than others).

In 1995, a year after the release of the first Tekken, Tekken 2 was released on the arcade. Harada still works as a consulting advisor. He appears present in the credits of the game.

Tekken 3 was released on the arcade in 1997. Harada worked as a co-director this time with Masahiro Kimoto. He was involved with three other people in creating the console game mode Tekken Ball.

Harada was already working on Tekken 4 but Namco wanted to release a Tekken game for the arrival of the PlayStation 2. That's when he came up with the idea of a Tag game, which became Tekken Tag Tournament. Tekken Bowl was also thought of by Harada for the console version.

Tekken 5 was released in 2005 on console. Upon revealing his job to his parents, they were "devastated and burst into tears."[4] He tried to persuade to them of the merits of his professional orientation but with no result.

By Tekken 6, he is seen as the face of Tekken. He answers questions on social networks, including Twitter and Facebook. With Tekken 6 comes Michael Murray as the game designer. He accompanies Harada and serving as his translator during various events.

In 2008, Harada was a co-director on the SoulCalibur IV game. This is the only game in the series where he has such a role. He was only advisor on the other projects.

In 2015, he was promoted to general manager at Namco. He helps on new licenses such as Lost Reavers and Summer Lesson. The Pokémon Company offers Harada to do a mix with Pokémon and the Tekken style for Kazuya Mishima. Harada was unfamiliar with the Pokémon universe but devoted himself to the game Pokkén Tournament by helping the development team.

In December 2018, Harada was named director and supervisor of esports strategy.[5]

In May 2019, Harada became general producer and therefore the leader of all Bandai Namco's major franchise such as Dragon Ball, One Piece, Time Crisis, Digimon, Ace Combat, Dark Souls, Tales of and SoulCalibur. Michael Murray then becomes the producer of the Tekken series. Harada continues as Bandai Namco's esports strategy supervisor.

In March, 2021, Harada made a variety show known as Harada's Bar that has him speak with personalities, developers, players and other important people.

Katsuhiro Harada with two women cosplaying as Xiaoyu and Lili.

Harada and Ono in a SFxTK conference. 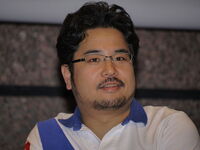 Katsuhiro Harada at the "Montpellier in Game" festival (2010). 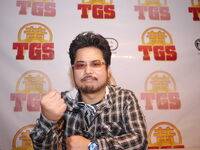 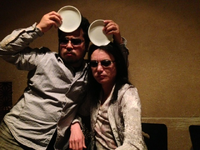 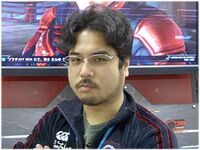 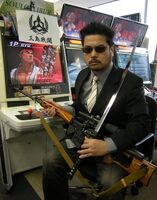 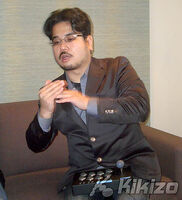 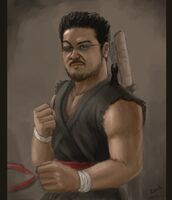 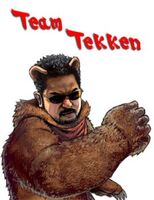 Harada making a cameo behind Shaheen. 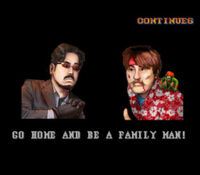 Harada and Ono in a Street Fighter II screen.

Harada in his Tekken 7 in-game appearance at the end of Negan's second gameplay trailer.