Kazumi's Tiger is a minor character in the Tekken series that made its first appearance in Tekken 7. It is Kazumi's pet tiger and a part of her move set and win poses. It has an unplayable form which appears alongside Devil Kazumi.

Kazumi's Tiger appears to be a Bengal Tiger based on its size and its alternate, white appearance. In Kazumi's intros, win poses, and taunt, she can be seen petting and speaking to the tiger, and it also plays a part in Kazumi's move set as an extension of her attacks or as a projectile.

When Kazumi changes form and becomes Devil Kazumi, her tiger changes from orange with black stripes to white with black stripes. As can be seen by the tiger's ability to change color and its lack of a true corporeal form, the tiger is, like Kazumi herself, no longer alive.

Kazumi's tiger appearing alongside her in her final stage intro. 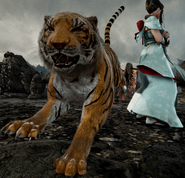 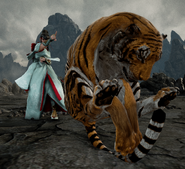 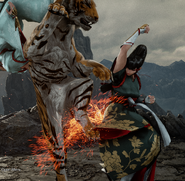