Lars is very muscular, as evidenced by his large biceps, visible abs, and pectoral muscles. He has sandy brown hair that is spiked up vertically and has blue eyes. He also has a scar on his left brow.

His first outfit consists of a red and black armored Tekken Force suit, along with a black cape and a metal lion chestplate.

This is his primary outfit throughout the series until Tekken Tag Tournament 2. In the Scenario Campaign when he was blown by the JACKs and losing his memory inside Dr. Bosconovitch's lab, he briefly loses the black cape. He later wears it during his infiltration against G Corporation and his final fight against his half-nephew, Jin Kazama at the outside of Azazel's Temple.

His second outfit consists of reddish-brown shoes, white hipster pants with a matching reddish brown belt around his waist and white designs in each side of his pant leg, a black denim jacket with a large white design on the top part and an extended collar, and red gloves. This is his casual outfit in the middle part of Scenario Campaign mode and after he entrusted Lee to repair Alisa at Violet Systems at the end of Scenario Campaign mode.

In Tekken 7, his Player 2 outfit became a part of his customization as he wears this outfit during the arcade beta testing before he changes to his new main outfit as the arcade version of the game was finally released.

In Noctis Lucis Caelum's DLC reveal trailer in Tekken 7, Lars wears this outfit while he was fishing with Noctis at the Jungle Outpost.

His sandy brown hair becomes blond and was extended into a traditional high ponytail that was styled into a crescent moon shape.

He wears a traditional ninja attire consisting of a red traditional tunic with stripe designs and a white long sash which is tied at the back on his waist. He wears a black and gold designed gloves, matching gold and black tights and traditional red sandals with three gray straps to cover his feet. He also wears a traditional gold necklace on his neck. This appearance is later used in the game Naruto: Ultimate Ninja Storm 2 which Lars serves as a guest character of the game.

In both his Player 1 and 2 outfits, Lars usually carries firearms such as his handgun which he uses to shoot his father, Heihachi after regaining his memories and later Lee during the events of the Tekken 7 Story Mode.

Lars' third outfit in Tekken 6.
Add a photo to this gallery

Lars' Swap Costume is based on Geki and he wears a black and purple traditional ninja attire with a matching ninja boots, a purple headband and a matching ninja mask where he conceals half of his face and has Geki's purple claws while donning his outfit.

His alternate costume is based on his down vest attire and rider gear customization from Tekken 6. He wears a black openly short leather vest with a white extended collar, black rider pants with red linings, and black combat boots. He also has a large black cape to cover at the back with a silver side belt at the left side with a lion buckle. He also wears black warmers with matching straps on each side of his warmers. His hair while wearing the outfit is red instead of sandy brown.

His alternate appearance from his primary outfit is blue.

Lars in his swimsuit. 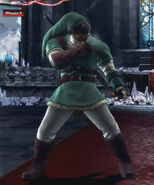 In Tekken 7, he has a new main outfit. It is black with gold and silver linings and he has a red cape in two sides similar to a scarf and a gold and silver lion pauldron on his left shoulder along with his red cape. The edge of his cape has shreds on each side.

He wears this outfit throughout the Story Mode where he rescues his half-nephew Jin from being captured by the Arab soldiers. He also carries the machine gun item move which he uses as part of his Story Assist.

Lars in Tekken 7.
Add a photo to this gallery
Retrieved from "https://tekken.fandom.com/wiki/Lars_Alexandersson/Outfits?oldid=128701"
Community content is available under CC-BY-SA unless otherwise noted.