As well as undertaking heavy industrial production, Mishima Industries is the producer of all the Mishima Zaibatsu's robotics. Initially, Mishima Industries only provided software and weapons development for robot manufacture elsewhere.[1] Later however, they expanded to have their own robotics department.

Mishima Industries produced the artifical intelligence software programming used in the Russian-made Jack robots. Some of their software was altered by Jane a robotics engineer:

Still haunted by memories of Jack-2's fate nineteen years later, works on a way to restore Jack-2. She learns that most of the technology responsible for Jack-2's A.I. was created by Mishima Heavy Industries, a subsidiary of the Mishima Zaibatsu. She also finds the ground work for something called "Project Gun Jack", an upgraded Jack with the addition of a pivot gun. Jane snuck into Mishima Heavy Industries and secretly installed the hidden program.

Under Kazuya Mishima's leadership, the Mishima Zaibtsu worked on repairing the defunct remains of Prototype Jack. The project was given to Doctor Bosconovitch who 'upgraded' Prototype Jack, by giving it a memory wipe and a pair of sunglasses. Non-canonically, in Tekken Tag Tournament 2, a large rocket ship is built in the shape of Prototype Jack, presumeably by Mishima Industries. It explodes shortly after lift off.

Under Jin Kazama, Mishima Industries created its own robot, NANCY-MI847J, to protect Jin from any rivals, especially G Corporation which is currently owned by Kazuya Mishima. The "MI" in NANCY's serial number stand for Mishima Industries.

At some point, Doctor Bosconovitch worked for Jin Kazama's Mishima Zaibatsu, and created a robot protector for him. He made the android in the image of his dead daughter, also called Alisa, and gave her a similar personality too. The robot was awakened in an explosion caused by an invasion of the rebel Tekken Force cell, Yggdrasil, and Alisa was found by Lars Alexandersson. Alisa has spy software and override programming in her that can be accessed only by Jin.

An orbital laser was created by Dr. Abel for the Mishima Zaibatsu. It was likely created through its subsidiary company, Mishima Industries.

The Mishima Zaibatsu's genetic experimentation was undertaken by Mishima Industries in the past. In Tekken 6, the ruins of a biotech research station run by Mishima Industries, can be found populated by genetic experiments. Many bears and kangaroos can be found here and the site has been in ruins for many years according to Alisa's journal. This was the original research laboratory run under Kazuya's Zaibatsu, when genetic experimentation was the focus, and where the original Roger and Alex were created. Kazuya confirms this in Tekken 6 when he visits the location in campaign mode.

It is possible that the genetics project Devil-Human Integration Program run by Doctor Abel is also a Mishima Industries project.

After Jane went to work for G Corporation, the company decided to continue on the Jack project that originally belonged to the Russian government. They created Jack-6 and Jack-7, with the help of lead engineer, Jane, in order to counter Mishima Industries' NANCY-MI847J.

Two years before the events of Tekken 5, Jane tried to sneak into the Mishima Industries with the help of Gun Jack. However, they were discovered by a Tekken Force patrol and were fired upon. Gun Jack placed himself in the line of fire to protect Jane. After the hail of bullets stopped, Gun Jack had ceased to move. 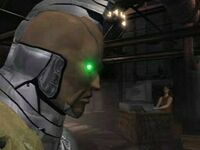 Gun Jack being altered by Jane in Mishima Industries.

Gun Jack being altered by Jane in Mishima Industries.