Mishima Zaibatsu's orbital laser satellite is a weapon of mass destruction created by Doctor Abel. It is initially depicted as a two-panelled satellite, and later as a five-panelled satellite, sitting in orbit above the Earth. It is capable of shooting a red laser down to the surface with expert precision, causing a devastating amount of destruction. The Zaibatsu most likely gained control of the satellite when Dr. Abel joined the company in Tekken 4.

The laser satellite is first seen in Tekken 2, in Jack-2's ending. It appears again in Gun Jack's ending in Tekken 3, where it is revealed to be made and used by Doctor Abel.

In Tekken 7, Heihachi Mishima orders the satellite to fire at G Corporation HQ, which destroys the whole building. However, Kazuya Mishima survives due to his demonic nature, as does Akuma. 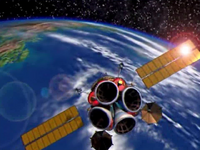 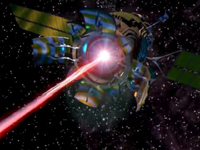 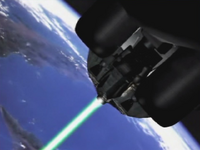 Destruction caused by the fallen Orbital Laser in Tekken 7.

The laser satellite crashes to earth destroying a city.