Asuka Kazama (Daughter)
Jun Kazama (relation)
Jin Kazama (relation)
Mr. Kazama is a minor Tekken character. He the father of Asuka Kazama and a member of the Kazama Clan. He left his native home of Yakushima to set up a dojo in Osaka, where he is the lead sensei and teaches Kazama Style Traditional Martial Arts. The only known information about him is that he is Asuka's father and that he was hospitalized by Feng Wei in Tekken 5. The reason Asuka entered the King of Iron Fist Tournament 5 was to get revenge on Feng Wei for hurting her father.

According to Lili, who, in Tekken 7, claims to know all about Asuka's situation, after Mr. Kazama was beaten by Feng, he lost his students and his livelihood. This left the family to poor to fix Asuka's bike, let alone the family dojo.[1]

Mr. Kazama also made an appearance in the non-canoncial Online Tekken Comic. 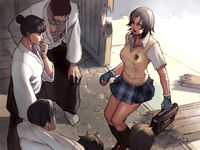 The attacked dojo, its students, and Asuka, possibly with Mr. Kazama in the top left.