Polar Paradise is a stage in Tekken 5. There are penguins and a few seals surrounding the fighters who are on a huge block of ice that is above a large body of water. The penguins are seen waddling about near the players. 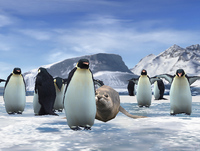 Penguins and a seal.
Add a photo to this gallery

Retrieved from "https://tekken.fandom.com/wiki/Polar_Paradise?oldid=121998"
Community content is available under CC-BY-SA unless otherwise noted.