A Rage Art is a type of move introduced in Tekken 7. It is a powerful attack with power crushing properties that can only be used when a fighter has Rage. Rage Arts are similar to Ultra Combos in the Street Fighter IV series and Critical Edges in Soulcalibur V and Soulcalibur VI. Rage Arts were the only moves that let a character expend their Rage status until the introduction of Rage Drives in Tekken 7: Fated Retribution.

Most Rage Arts are mid attacks, meaning they can hit both standing and crouching opponents, though there are several exceptions: Alisa, Anna, Jin, and Steve all have high Rage Arts (though they are much faster and safe on block if not ducked), Lucky Chloe's Rage Art is a low, Akuma's is an unblockable grab that can only be dodged by holding any upward direction, and Geese's Rage Art is an unblockable high. Most Rage Arts are also extremely unsafe on block (again, excluding the highs and unblockables), with the exception of Hwoarang as he must do his Rage Art while in Left Flamingo stance, though it can also be avoided with a well-timed sidestep or an attack that has a built-in sidestep. Rage Arts that have the character jump in the air like Gigas, Lei, or Devil Jin are considered low crushes, and lows will be avoided when they are in the air.

In Fated Retribution, Rage Arts do more damage the less health the user has. This change was made due to Rage being triggered at a higher threshold compared to the original Tekken 7. As Rage Arts have power crushing properties, a fighter who initiates one can still execute the attack if they are hit during the start up animation (as long as they have enough health to survive the attack), making them powerful crush moves. The only limitation to this, however, is that Rage Arts cannot absorb one another. This means that whoever lands their Rage Art first will be the one who successfully attacks.

However, given that Rage Art's are punishable and using them forfeits the player's rage status, Rage Drives are generally safer and more useful alternatives and thus, rage arts are seen relatively rarely on a competitive level. It is possible however to combo into a Rage Art and this is a safe way to deal a ton of damage. Rage drives however have more complex inputs and the player must learn them for each character individually, while rage art has a button dedicated to it in addition to having traditional inputs, making rage arts much simpler to execute.

Rage Arts cannot be reversed by most characters and standard parries will not work against them. Notable exceptions to this rule include Jin's parry, Leroy's Twin Dragon Gate and Geese's Joudan Atemi. 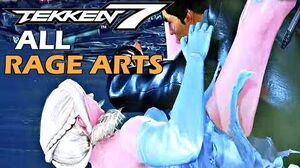 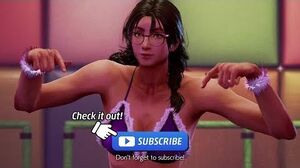