Natural causes. (TK2)
Killed by gunfire while trying to protect his two daughters. (Death by Degrees)

Richard Williams (リチャード・ウィリアムズ, Richādo Wiriamuzu?) is a minor character in the Tekken games. The father of Nina Williams and Anna Williams, Richard made several appearances in flashbacks in the Tekken spin-off game, Death by Degrees. He was shown being killed by gunfire while trying to protect his two daughters. However, in the official Tekken canon, he dies after the first Tekken. His death strengthened the rivalry between Nina and Anna, as both blame each other for his death. 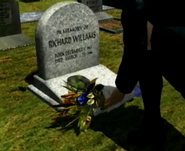 Richard's grave in Nina's Tekken 2 ending.
Add a photo to this gallery

Retrieved from "https://tekken.fandom.com/wiki/Richard_Williams?oldid=116102"
Community content is available under CC-BY-SA unless otherwise noted.