The game was set to have an sequel entitled, Tekken X Street Fighter but it was officially stalled.

Prior to EVO 2010 - the annual fighting game world championships in Las Vegas, Nevada - Street Fighter producer Yoshinori Ono was teasing a yet announced game which was initially believed to be a new Darkstalkers entry. Before EVO 2010's Super Street Fighter IV finals, Tekken producer Katsuhiro Harada confronted his opposite number on stage after teasing more of the game that would officially be announced at the 2010 Comic-Con.

During the Super Street Fighter IV panel at Comic-Con, Harada appeared out of the crowd and went towards the stage while handing out free copies of Tekken 6. Ono and Harada then confirmed the existence of Street Fighter X Tekken. Both the teaser trailer and early gaming footage of Street Fighter X Tekken was also shown at Comic-Con. During the announcement, Harada also revealed that he had a related project underway, which was to be developed by Namco. As Namco is in charge of production of that game, the gameplay will be similar to that of Tekken.

This is not the first time Namco and Capcom have made a game together as they released a Japan-only crossover game in 2005 for the PlayStation 2 titled Namco X Capcom. However, this game did not exclusively consist of characters from the Street Fighter universe and Tekken universe but instead included various characters from the entire Capcom universe and entire Namco universe.

Somewhere in Antarctica... Rumors around a mysterious box called Pandora. No one knows what's inside it, but everyone wants to get it. Some for good, some for bad.

That's when two universes intersect. Tekken characters fight Street Fighter characters for the Pandora box. Each of them has their own reasons, but everyone wants to win.

Because of its developer, the core gameplay is similar to that of the Street Fighter series, incorporating elements such as a meter than enables Super Arts as well as EX Attacks from Street Fighter III: Third Strike and Street Fighter IV. Some Tekken fighters also gain Street Fighter-like mechanics - for example, Jin and Raven both obtain projectile attacks. Also, the inputs for select Tekken moves have been changed to quarter-, half- or full-circle inputs that are prevalent in Street Fighter and numerous other fighters. Pro players mostly have the opinion that Street Fighter characters are better at zoning and "footsies" while the Tekken characters have more punishing chains and combos (as a consequence, this is the first Street Fighter-produced game with bound combos, including wall bounces).

Players each choose two fighters from the Street Fighter and Tekken series, the latter of which can be optionally controlled using Tekken's 4-button system or Street Fighter's 6-button system (jab, strong and fierce punches plus light, medium and roundhouse kicks). These fighters can be switched out normally, or during certain combos. As fights go on, players build up power in a three-sectioned meter at the bottom of the screen referred to as the "Cross Gauge", which can be used to perform EX Attacks and Super Combos, along with various Cross techniques detailed below. As opposed to the other crossover fighting games released by Capcom such as Marvel Vs. Capcom, where a player must eliminate all the opponent's fighters to win, victory conditions are more similar to Tekken Tag Tournament, in which the first player to have one of their fighters' health bars reduced to zero loses the round, with the player who wins the most rounds winning the match.

The tag team element of the game is heavily emphasized, with players being able to switch between the two characters in their team in a variety of manners. Switch Cancel allows players to switch partners in the middle of a combo (which allows for "safe" tags similar to Tag Crash), whilst Cross Rush combos involve combo-ing into a launcher before swapping partners and continuing the combo, similar to the launcher switch mechanic in Tekken Tag Tournament 2. Cross Arts, which requires a full Cross Gauge, allows players to combo a start-up string by one character into the partner's Super Art in one straight attack, whilst the Cross Assault mechanic allows players to simultaneously control both characters in their team until the Cross Gauge runs out. When a character on a player's team has less than 25% health remaining, that character can be sacrificed in order to activate Pandora Mode, which gives the remaining fighter increased strength and an infinite Cross Gauge. However, this state has a time limit and the player will automatically lose if he/she cannot defeat the opponent before the Pandora state runs out.

The game features various online options. Two players can battle on the same team, one controlling each character, and face off in four-player matches. Scramble mode allows four players to fight simultaneously in pairs of two. The game also supports online training modes which can be played competitively or cooperatively with two players, as well as support the Fight Request feature.

Official Tag Teams and their rivals:

In the arcade mode, for the Street Fighter characters, sub-bosses are Jin and Xiaoyu and the boss is Ogre.

For Tekken characters, sub-bosses are M. Bison and Juri Han and the boss is Akuma.

There are several CG trailers for the game, each showing Tekken characters, and their official Street Fighter rivals (except the one where King and Marduk fight Poison and Hugo instead). The cinematic trailers show: 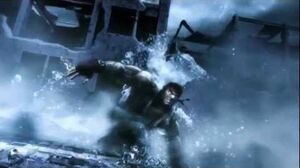 An official soundtrack entitled Street Fighter X Tekken Original Sound Track, was included with the collector's version of the game.