Sugar is a minor character in the Tekken series. Sugar is Leroy Smith's pet dog who first appeared in Tekken 7 as part of Leroy's move set and win poses.

Sugar is an American Bully, a type of pit-bull terrier. Sugar is the pet of Leroy Smith and accompanies its master during battle. Leroy can summon Sugar into combat, but the dog will only attack randomly, depending on its mood. 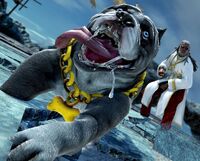