This article is about the non-Tekken game, Super Smash Bros. Ultimate. For more details see the Smash Wiki.

Super Smash Bros. Ultimate (大乱闘スマッシュブラザーズ SPECIAL, Great Fray Smash Brothers Special?), often shortened to SSBU (スマブラSP, SSBU?) or "Ultimate", is a crossover action fighting game for the Nintendo Switch. The game was released worldwide on December 7th, 2018. It is the fifth installment in the Super Smash Bros. series (sixth if the two versions of Super Smash Bros. 4 are counted as separate titles).

In the base game for Ultimate, the only Tekken-related content is Heihachi Mishima appearing as a sprite for fellow Namco character Pac-Man's up taunt, where his older sprite from Tekken Tag Tournament 2 is one of many Namco-related sprites that Pac-Man can randomly spawn.

In the sixth batch of paid DLC outfits for the Mii Fighters, which was released on June 19, 2020, a costume for Mii Brawlers based off of Heihachi (specifically in his younger design from Tekken Tag Tournament 2) was included; the costume was previously included as paid DLC in Super Smash Bros. for Nintendo 3DS / Wii U.

On June 15, 2021 during Nintendo Direct: E3 2021, Nintendo revealed that Kazuya Mishima would be included as a playable DLC fighter as part of Challenger Pack 10, included within the Fighters Pass Vol. 2. Challenger Pack 10 will release on June 29, 2021, and will also include Mishima Dojo from Tekken 7 as an additional stage, with Heihachi (in his older appearance) appearing as a background character, as well as 13 Tekken-themed spirits and 39 Tekken music tracks. Kazuya has a larger moveset than other fighters and is based on various combos that he can do from his series. He also has Rage and the ability to transform into Devil Kazuya for his smash attacks, special moves, midair jumps, Final Smash, and victory screen.

There are 39 music tracks available with Kazuya, all of which are available to play on Mishima Dojo, as well as the four Super Smash Bros. stages: Battlefield, Small Battlefield, Big Battlefield, and Final Destination.

Spirits are special items used to enhance character abilities. They are unlocked after beating a puppet fighter whose appearance resembles the spirit character's. 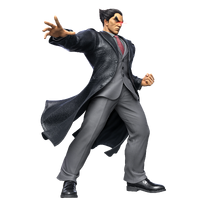 Mishima Dojo as it appears in SSBU