Survival Mode is a mode in the Tekken series where the objective is to defeat as many opponents as possible on a single Health bar. The mode ends when the player loses a match. This mode made its debut in Tekken 2 and has returned in every subsequent Tekken game with the exception of Tekken 7.

The player selects a character, who then faces a succession of opponents until the player loses a match. The difficulty of the opponents is fixed, with the opponents gradually becoming more difficult with each match, and the number of rounds is locked to 1. If the player takes damage during a match, only a small amount of it will recover for the next match. The amount of health restored is slightly higher if more time is left on the clock, providing an incentive for the player to defeat opponents faster.

If the player breaks a high score and defeats enough opponents, they will get a message saying "You are the greatest survivor".

Otherwise, if they fail, they will receive a message saying "You need more Practice".

Ancient Ogre & Alex after winning a match in TTT 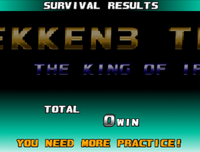 No win results in DR, note the lack of message.