Back to page
View source

The whole layout should be redesigned, since it's really looking bad. It's too much dark (a white theme will looks much more professional and encyclopedic) the background is bad scaled (while we possess the High Resolution pics of those two versions of Kaz & Jin. So no reason for this), and the main page is truly not ergonomic. the "Fighters" page is a category page, which isn't pleasante at all, as well as the Game page (I tryed to improve it, but there is still a lot to do). PLEASE do not take this as being an "attack" nor an offense, but I just want to improve this as much as possible --Golden Specter (talk) 08:12, February 8, 2013 (UTC)

Yeah, the background does not have any quality, but I just checked the customization page and there is a reason - the limit is 150 kb. x_x how do good things with this

Well, black is a color that fits the Tekken series, so I think it actually looks nice. I don't think white would be a great idea. Also, I agree the wikia is not looking good. I'll ask the other admin if I can customize the wikia. Thanks for your feedback ^_^ Redside12 (talk) 20:30, February 8, 2013 (UTC)

Thanks for your answer. I do understand about the black color, it's just a matter of choice . I think it's more the background itself than make things wrong. Why not using those renders on a full black background, with real colors instead of blue/ Red? Or using TTT2 models. I tried on a personal Wiki this, and it render pretty well, with "TILE" and "FIX" both checked. 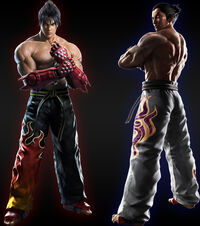 Improvments/ Modifications can be made easily of course.
And you're welcome about the feedback, I truly hope it will help this Wiki to expand and develop! Remember than background + Main page Layout are the FIRST things that a user see.
Besides, the favicon is pretty good ;)--Golden Specter (talk) 21:55, February 8, 2013 (UTC)

Maybe it would be a better idea if the background was more simple, like in the Vocaloid Wikia... Then we keep the dark grey, if needed make it a little lighter so it won't be too dark (though I do like the wikia really dark).

And yes x_x I've been wanting to finish editing some pages and start editing others, but aghhh anything happens and I end up doing nothing. I shall write a to-do list in my user page later, because if it depends on me and my amazing memory of a fish... -_- (Finish adding the fanart templates to gallery, more than likely change the text in it because it's looking bad and create a page for the characters (a list, like wikipedia) because the category does looks quite "lol we don't care" and I need to write some things in the Tekken Card T. page because I'm a beta tester etc...)

Well, we can think about two options: trying to use a High Res pic for the background, or using simple things such as Jin's symbol, Mishima Zaibatsu Logo, draws (official of course) from characters or anything else matching the definition of "simple". This second option will be, of course, easier to do. Oh, and about the cutted background, it's bizarre. It may vary from someone's computer to someone else's computer?
Whether you'll use a very dark or not is just a matter of personnal preferences, but the most important is that it should fit to the page and looks good.
I understand for the editing, I shall write myself a "ToDo List" in other Wikia as well, since it's a huge work, and we end up in doing nothing if we don't have a plan, a check list or a "reminder".
For the character page, we can think about creating a list or using pics like the Tekken OFFICIAL page [1]. It's visually more attractive. Golden Specter (talk) 10:06, February 9, 2013 (UTC)

I've done a simple background with the devil gene logo. I was going to do something with Jin/Kaz again, but I thought the image's quality would be way too low and personally I didn't find any image that would be great (I didn't want to redo the background >_>). So I did this one and switched the colors (brown - red, blue - yellow, and lightered the wikia a bit). Now I am going to work in the main page and later in the contents pages. Any feedback? ^_^ (If the Devil Gene logo is being cutted or something like this. Oh and btw, good luck on the other wikia!) Redside12 (talk) 01:43, February 10, 2013 (UTC)

Well, it's a lot better than the previous Background :) I reallly like the idea, it's as if we're in a "Room" with the Devil Gene logo painted on a rectangular pillar. I think that the part where the "pillar" stop (when it's a bit more somber) shouldn't be with those vertical lines, then it will enhance the feeling of being in a "Tekken Room" (it may sounds bizarre, but that's how I see it xD), and this area could be a bit more dark. You can also add a red ribbon like this on the top: [2], or even make the logo white/ red (a glowing red then).
The logo isn't cuted now, but the "pillar" is really near the page on the left, and far from the page on the right (while we can still see the logo).
Anyway, very nice job so far, and thanks for my others Wikias. ;) Golden Specter (talk) 07:40, February 10, 2013 (UTC)

Thank you both! ^_^ And I understand you, it feels like I'm in a room... idk, it's a comfortable feeling. But also, about the devil gene, it's because my computer's screen is 1280x800, and I was trying to make it look good on mine but also thinking on others. Somehow. (I was going to see how it looked like in my father's notebook which has a more flattened screen, but it was 1 am so I forgot)
I tried to use a glowing red (many shades of red, light red, dark red, pink red, orange red, pineapple red, wood red, capoeira red, etc etc), but none of them looked good, so I used a white one because it looked nice to me :3
And it's proposital, I do not want the logo to appear in both sides. I shall fix it now then!
edit; Just saw how it looks like on my father's computer. Dammit the page looks quite weird. I'm going to fix it but sadly cannot do much now since I have to go to a barbecue >_<
Redside12 (talk) 14:29, February 10, 2013 (UTC)

Hey, it's not looking weird :p But I think too that it must fit the standard resolution of today, which is 1920*1080 or 1600*900 for many laptops. I do understand about the glowing, it's something hard to do on photoshop, sometimes it looks horrible, especially when the picture's resolution is low. Golden Specter (talk) 19:36, February 10, 2013 (UTC)

Hullo! I am Kirkburn, your friendly local Wikia Gaming Helper!

You may be interested to know there is a Wikia gaming IRC channel, #wikia-gaming on chat.freenode.net, where you can hop on, ask for help from users of other gaming wikis, or offer your own experiences. If you are not familiar with IRC clients, you can access it from http://irc.wikia.com/gaming.

Different people may be on sporadically, but we organize weekly chats at a fixed time so we can get the most number of people online at the same time to ask and answer questions, or just to hang out. The admins of some of Wikia's biggest gaming wikis (e.g. WoW, Halo) often attend them. You can find the time for the next chat by following this link.

I don't think it's too much to ask that we have 100 articles by July 2009, a full two years after the Tekken Wiki was started. Therefore, I propose that if you create a new article, it is listed here and the 100th article created will be used as the first featured article. When you add an article, stick it on here with it's article number. Like so:

This site is very innaccurate and flat out wrong about many of the ages and years the characters are born, seriously who's the kid that said Jin is born in 1986? But I digress, I know the real timeline of the Tekken series and the birth dates of most characters (right down to the years at least, Tekken 6 new characters I can't tell because there is no official source stating the age of Lars, Alisa, etc. that I know of) The year that the first Iron Fist Tournament was held is... 1999

My proof? Well there are no official sources stating the year Tekken takes place, except for this little flyer promoting the arcade version of the original Tekken back in '94 I stumbled across.

It's a bit hard to read, but it clearly says at the start of the text at the bottom says that the tournament takes place towards the end of the twentieth century. This to me means that it takes place during 1999 or some time close to that timeframe. From this info and character ages stated in manuals and other sources, these are the following tournament dates.

So, what do you guys think? Agree? Disagree? Should the pages be edited as such?

I agree and disagree.

I agree in the fact that we don't know any birthday from any character, because Namco never released such informations.

Thus, there is NO need to add any calendar date, because it make no sens: Namco never spoke about any date, then we can't speak about it.

It's like trying to shape a new story for Jin Kazama, you can but it won't follow the serie, it's just a fictional fan story. So in conclusion, I really think we should give up all those date and leave everything without date :)

Hello, the link to the Kensei Wiki is broken, it lacks a comma, though I recommend to replace the link with w:c:kensei, it will directly redirect to the wiki without the whole URL.

What on God's green Earth posessed you people to use comic sans as for the title font of your articles? Do you not want people to take your Wiki seriously? If you need an explanation of why you using comic sans is a bad thing, refer to this website: http://www.comicsanscriminal.com/ –Nahald (talk) 00:00, November 14, 2017 (UTC)

Hi, Nahald! You actually timed your comment perfectly - I was promoted to Admin literally hours ago, and that gives me the power to change the font; I have been contributing to this site for a while, and I was never really fond of the Comic Sans either. If you have any suggestions for which font you would prefer, do let me know. Dark Shackle (talk) 00:10, November 14, 2017 (UTC)