Tekken (鉄拳) is a 2010 Japanese-released, American-produced martial arts film adapted roughly from the fighting game series of the same name. The film follows Jin Kazama in his attempts to enter the Iron Fist Tournament in order to avenge the loss of his mother, by confronting his father and his grandfather, the latter of who he thought was responsible for her death.

The year is 2039. World wars have destroyed everything and territories are run by corporations, the mightiest -- and cruelest -- of which is Tekken. Jin Kazama (John Foo) witnesses the death of his mother Jun (Tomita) by Tekken in the slums known as Anvil. Vowing vengeance, and armed only with his street smarts and raw fighting skills, he enters a dangerous and potentially deadly combat tournament, where he must defeat the world's most elite fighters to become the "King of the Iron Fist."

Jin Kazama has been raised by his mother, Jun, She has trained him in martial arts and has been a mentor, yet she never speaks of Jin's father, claiming he is dead. In 2039, Jin is now a rebellious 19-year-old teenage fighter and contraband runner who lives in the Anvil, and usually goes into fights and cooperates with the resistance groups to earn money to provide food (fruit, coffee and chocolate have become expensive and rare commodities in the Anvil). One night, Jin is targeted by the Jackhammers, the elite specs group that patrols the Anvil and ensures the safety of Tekken City, for cooperating with the resistance groups. He tries to return to his home, only to find his mother, Jun, killed by the Jackhammers bombarding the house.

Grieving the loss of his mother and feeling guilty that he had not protected her, Jin swears revenge against Heihachi. In the ruins of his former home, he finds a Tekken Fighter I.D. belonging to Jun, revealing she was once an Iron Fist fighter. Furious about this, he decides to try out at the Open Call, which lets the Anvil pick a fighter for the tournament. After defeating the disgraced Marshall Law, who was dropped out of the Tournament and forced to fight in the Open Call, Jin is sponsored by former boxer Steve Fox, sponsor of the Open Call and former Iron Fist fighter, and is hailed "The People's Choice", who takes him to Tekken City.

Upon entering Tekken City, Jin befriends mixed martial artist Christie Monteiro. After witnessing Raven overpower Capoeira fighter Eddy Gordo in the first match, Jin wins the match against Miguel Caballero Rojo, nearly killing him in a fit of rage. Heihachi's son, Kazuya Mishima, is impressed and offers Jin a place in Tekken Corp., but Jin refuses. Later that night, after sneaking out with Christie and visiting a nightclub, Jin is attacked by masked assassins, on the orders of Kazuya, who is scheming to take over Tekken and sees Jin as a possible obstacle since he is hailing as People's Choice. Jin survives the assassination attempt, thanks to Christie's interference. Steve and Christie attempt to discourage Jin from continuing in the tournament, but Jin vows to win Iron Fist and kill both Heihachi and Kazuya, and he gives Fox Jun's ID, he realizes he is her son, telling him that he knew her. Meanwhile, Kazuya blackmails the tournament's champion, Bryan Fury, into killing Jin in a match or be exposed as a partial cyborg, banning him from the tournament for life as cyborgs are banned from fighting.

During the quarter-finals, Christie is paired with Nina Williams. But before the fight, Jin notices Nina's face, she was one of the assassins. After Christie defeats Nina, Jin is matched up with an elite swordsman named Yoshimitsu. Heihachi, liking this young fighter, deems that this match be reserved for the semi-finals and attempts to change the order, but Kazuya, who controls the Jackhammers, stops him. Kazuya then has Heihachi imprisoned and orders the match to begin, effectively seizing control of Tekken. Jin narrowly defeats Yoshimitsu, thanks to Heihachi tripping a security alert in the arena.

Following the match, Kazuya orders all of the fighters to be detained. He tells them that the rules have changed, and so they must now fight to the death. Jin, Christie, and Steve try to escape, along with Raven, leaving Nina & Anna Williams and Sergei Dragunov behind, since they were in a separate cell. Kazuya notices them escaping and brings down some guards, causing a firefight. Steve, Christie, and Raven cover Jin but he walks across Heihachi's cell. Angry, he tries to taunt him, saying he is responsible for killing his mother. However, because Heihachi is their only chance of escaping Tekken, Steve frees Heihachi and joins the group. On the gunfight, Raven is wounded and recaptured, while the others make it out to the Anvil.

In the warehouse that Jin uses as protection, Heihachi reveals to Jin the true nature of his origin. 20 years ago, Jun was fighting in the first Iron Fist tournament placed by the Tekken Corporation after the war, and she impressed Kazuya, who raped her, making him Jin's father, and left her for dead. She survived the assault and Heihachi took her out of Tekken City to the Anvil to keep her alive. Heihachi also tells Jin that since he is Heihachi's grandson, he could become the next Chairman. He also states the corporation's true purpose is to restore order to the world, though Jin can't believe what he is being told, believing that the corporation is spreading terror and fear to its residents. Heihachi entrusts Jin with the task of defeating Kazuya. Later on, the group is located by Jackhammers, who kill Steve Fox in a firefight and recapture the rest of the escapees. Before taking them back to Iron Fist, Kazuya orders the Jackhammers to execute Heihachi.

Back in Tekken City, Raven comforts a dispirited Jin, saying that he saw what Jin did to Miguel Rojo and reminding him that anger doesn't fuel the soul, but incinerates it. Raven tells Jin that because there are many people depending on him, he can become champion without letting anger take control of his body. In the Finals, Jin is forced to fight against Bryan Fury, who had already killed Sergei Dragunov in a death match, while Kazuya holds Christie in the control room. At first he is outmatched, but remembering his mother's teachings, Jin kills Bryan.

Angered about Jin's victory, Kazuya enters the tournament himself, armed with half moon axes, and begins the final match. The weaponless Jin is battered and is about to lose. He is saved, though, when Christie escapes by shooting the Jackhammers guarding her, creating a distraction. This allows Jin to wound and pin Kazuya, who baits Jin by claiming that he remembers how Jun "put up quite a fight." Kazuya taunts him into inheriting the Mishima Curse (Heihachi imprisoned and killed his father and Kazuya presumably murdered Heihachi), but Jin refuses to kill his father, stating that it is not his curse.

Christie comes to the stage and declares Jin the new Champion of Tekken. Elated, the crowd both in and outside the arena cheer for him. When Christie asks where he will go, he replies that he will go home to the Anvil, since he doesn't want to run the corporation. He walks out of Tekken City's gate and is saluted by the Jackhammers - symbolizing his new role as CEO of Tekken Corp. In a voiceover, Christie explains that Jin's victory made the Kazama family name synonymous with hope in the Anvil, but that the true legacy of Tekken is only beginning.

After the credits, the scene shifts to Kazuya, who walks out of the arena and realizes that he lost control of the Jackhammers, who refuse to salute him. Back at Heihachi's execution, he kneels in front of a Jackhammer, who is holding him at gunpoint. His final words are: "I am Heihachi Mishima. I...am...Tekken. You will obey." The Jackhammer lowers down his gun and obeys his command.

Katsuhiro Harada, himself, has panned the film. He said that Namco was "not able to supervise that movie; it was a cruel contract,” and later went on to say that he was "uninterested" in the film.[1] The film was also widely criticizes by fans who disliked how far from canon the story strayed and how very unlike themselves the characters were, and it performed poorly at the Japanese box office. The film never saw a western theatrical release and was released direct-to-video.

The prequel, officially named Tekken: Kazuya's Revenge, was released on DVD and Blu-Ray on August 12th, 2014. 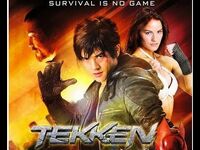