TEKKEN™ or Tekken Mobile was a free-to-play mobile game in the Tekken series released for Android and iOS. The game was first released in Canada, followed by Australia, New Zealand, Norway, Finland, and Sweden in an update around December 2017. The game officially launched worldwide March 1, 2018 and was playable until shutting down on February 15, 2019.

Explore the world of TEKKEN:

To recover the characters as their HP is damaged by the opponent, they are required to recover their HP by using potions or team potions but if the character is down or in a KO state after being defeated by a strong opponent or the acolytes. They will be recover using a revive potion.

Unlike other games who can upgrade hero grades of the characters within 1 to 4 stars, this game requires in order to gain the characters who were in 1 to 4 stars by getting fragments from common fragments to super rare fragments especially to gain any fighter at your side whenever you bought either premium or epic packs. If gaining common fighters such as the 1-star fighter to be obtained, the player collects a total of 10 character fragments once you cleared every acts in the Story Mode or in Challenge Dojo or to get Waza Cards when you obtained current fighters in your side and normal fragments used to craft their special attacks.

Lastly like in the Pokémon video games and in Tekken 6's Scenario Campaign mode, Every characters have an elemental affinity consists of Earth, Fire, Water and Lightning. Especially when facing an opponent, either type advantage or disadvantage to increase their attack damage in 15%. In the next update, the attack damage is greatly increased to 30%. The Limited Characters are the characters' limited edition that appears in various live events or obtaining them from buying gems at a higher price.

In the last update, the Skill system will be replaced with the Rune System, allowing more creativity to customize the characters' stats and their elemental damage. The Character Awakening requires the use of Awakening Stones. From 1-Star to 4-Star onward they were acquired to use Character Soul Stones along with 1 to 4-tier Awakening Stones to break their limits. The next update introduces the Auto-Battle System where the Al automatically controls the player as the player can turn on or off the autoplay. In Dojo Mode, players can do matchmaking against opponents who simply defend or relying on using Waza Cards to attack the player. In the latest update during Knockout Mode if the player restarts the game which resulted into his/her loss by default.

The soundtracks can be listened to in the NamcoMusicCenter youtube channel. 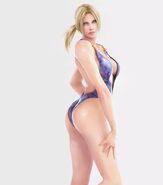 Retrieved from "https://tekken.fandom.com/wiki/Tekken_(Mobile)?oldid=125795"
Community content is available under CC-BY-SA unless otherwise noted.