A worldwide martial arts tournament was nearing its finale. A large purse of prize money, which was to be awarded to the fighter who could defeat Heihachi Mishima in the final round, provided an incentive for warriors from all over the globe.

Financed and sponsored by the giant financial group, the Mishima Zaibatsu, the first Tekken tournament began with eight fighters, all of whom had emerged victorious from various matches held around the world, brought together by different motives, all possessing the skill and power necessary for victory.

Many battles were fought, but only one lone warrior emerged with the right to challenge Heihachi Mishima for the "King of Iron Fist" title. This warrior was Kazuya Mishima, Heihachi's cold-blooded son. Bearing the scar given to him by his father, he enters into vicious combat with Heihachi on the same field where he was struck down and dropped from a cliff at the age of five.

After a grueling battle which raged on for hours, Kazuya emerged victorious by utilizing the power granted to him by the supernatural entity known as Devil.

As Heihachi's broken body lay on the ground, Kazuya dropped to his knee and lifted his father into his arms. Kazuya walked slowly to the edge of the same cliff from where his father had thrown him as a child. He stared out over the landscape, and let go of his father's body. As Heihachi's body plummeted, Kazuya's smile gleamed in the sunlight.

Two years have passed. The Mishima Zaibatsu under Kazuya's leadership has become even more powerful, with its tendrils reaching to all corners of the world. Soon after his father's apparent death, Kazuya disappears into the shadows. However, rumors of his immense power, and a dark side, slowly begin to spread throughout the world.

Two years after the end of the first tournament, a message is relayed from the Mishima Zaibatsu fortress to news agencies all over the world announcing a second tournament with a prize a thousand times that of the first.

Like his son before him, Heihachi survived his fall into the ravine thanks to his superhuman resilience. He then retreated to the hills to meditate in order to rekindle and enhance his fighting ability. He enters the King of Iron Fist Tournament 2 to reclaim his conglomerate and dispose of Kazuya once and for all.

The roles of primary protagonist and antagonist from the first game (Kazuya and Heihachi respectively) were reversed for Tekken 2, with Kazuya being the selected character's ultimate opponent (with the exceptions being Kazuya himself, who instead faces Heihachi, and Devil/Angel, who faces Jun instead).

Like the first Tekken game, there is a canonical ending, which is Heihachi's ending. Heihachi flies in a helicopter with an unconscious Kazuya, heading towards a volcano. Heihachi then tosses Kazuya into the volcano, before fleeing as it erupts. This is confirmed to be canon in the PS2's intro to Tekken 4, which shows the scene of Heihachi dropping Kazuya into the volcano.

The gameplay in Tekken 2 is much like its predecessor, but improves on almost every attribute. It still features an infinite playing field, and uses the same fighting system that utilizes four buttons: left punch, right punch, left kick, and right kick. It continues to use 2D backgrounds in its stages albeit now more detailed and occasionally moving during battle. Distinct additions included sidestepping and attack reversals for some characters, back throws, and chain-throws, while tackles were modified to inflict more damage when running from a greater distance. The number of moves and combos has been doubled compared to its predecessor. Tekken 2 also had lighting effects impressive for its time, making some arenas look remarkable. Characters still looked blocky but with a noticeable polygon improvement to give them a more polished look. Additionally, the heads of fighters could now move during battle. Some technical fixes were also made by Namco.

Tekken 2 went through three distinct revisions. The initial arcade release, denoted as Ver.A in the test mode menu, was more similar to the first game and lacked polish, with some characters being significantly overpowered while others such as Kuma were lacking updated moves to set them apart from the previous game aside from a generic back throw. An update was released a month later, with the arcade version proudly displaying a Ver.B logo on the title screen. Tekken 2 Ver.B featured bug fixes, damage balancing, block stun recovery, an improved juggle system, several new moves and modified AI. The third revision was the PlayStation home version, which featured all of the Tekken 2 Ver.B changes plus a few bug fixes and modified AI once again.

List of moves by character that can be performed in Tekken 2. 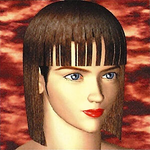 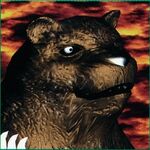 Tekken 2 gameplay
A sample of gameplay.