Tekken 2: Mishima Family Values was a comic book published by Knightstone in September 1998. The comic is a direct sequel to Tekken Saga, another comic by Knightstone, and takes place after the events that followed.

Kunimitsu uses her dagger and cuts off Yoshimitsu's hand. The latter still manages to defeat her, without his left hand and without his sword. One of the group members accompanying the ninja retrieves her body and runs away with it.

The robot Jack is ordered to fight Kazuya, but he manages to defeat him. He then questions Doctor Bosconovitch about the robot. The scientist explains to him that it is a prototype. Interested, Kazuya tells the doctor that he will find him in order to use the robot.

For their part, Paul and Marshall, still on motorbikes, go to a nightclub. As Paul pushes his way through, he notices that Marshall seems totally indifferent but Marshall reminds him he's married. Paul then spots Nina Williams at the club and hits her. In return, she throws him over the bar, which entertains the people around them. They laugh at Paul's haircut. A fight breaks out but Paul stops on his own, telling himself it's not worth it. He then brags about being able to win the upcoming tournament and leaves the venue. After he leaves, Nina smiles and says she will see him there again.

Kazuya confronts Kuma, while King fights against Ganryu who dominates him at first before King manages to gain the upper hand and defeat him. Paul beats Kuma with a punch in the stomach. For her part, Nina attacks Wang because he looks at her breasts insistently. Anna, meanwhile, dodges Michelle's attacks, but ends up leaving, feeling that this fight is a waste of her time. Finally, Lee cheats during his fight with Marshall by spraying his eyes with tear gas.

As the second round of the tournament prepares, Nina sneaks backstage. She kills two guards then infiltrates Heihachi's office to assassinate him. The office is empty. In turn, Anna sneaks in and shoots in the back of Nina who, therefore, can no longer participate in the tournament. Like her, King cannot face Lee, her new adversary, having had too heavy a hand on the whiskey.

With these two fighters sidelined, qualifying turns into the semi-finals with Paul versus Lee on one side and Kazuya and Michelle on the other.

The fight between Paul and Lee turns to the advantage of Paul, furious that the latter has cheated against Marshall. As he kicks Lee out of the ring, Paul is hit by a tranquilizer dart. It looks like Armor King is behind this act.

Only Kazuya and Michelle are left in the race. The winner will have to face Heihachi and if he wins, will take the lead of the Mishima Zaibatsu. Despite her determination and her desire for revenge, Michelle loses the fight. Kazuya does not kill her because he senses a presence in the crowd that restrains his desire for murder. This presence is none other than Jun Kazama.

Observing the outcome of the final, Heihachi says that ultimately it is impossible to fight his own fate and confides in Anna that he will fight Kazuya the next day in a different location than originally planned.

The next day, Kazuya and Heihachi find themselves at the top of a mountain. A long fight begins which is won by Kazuya thanks to a powerful uppercut which knocks Heihachi. He then lifts his father's body and throws it into the void, content to take power over the world. 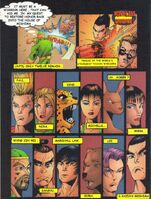 Nina Williams is handcuffed in front of Kazuya Mishima and Anna Williams. Anna and Nina engage in battle. 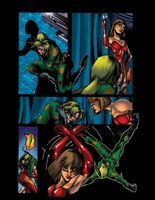 After tranquilizing Nina, Anna seems to have emerged victorious. Anna and Nina's fight continues. It seems Anna has the upper-hand. 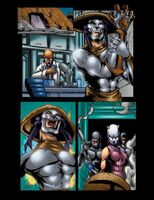 Yoshimitsu tries on his new arm and is attacked by Kunimitsu. 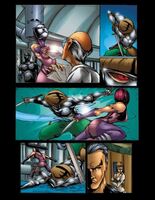 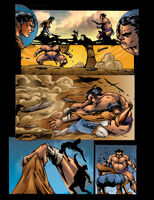 Michelle Chang and Ganryu fighting in a wasteland. 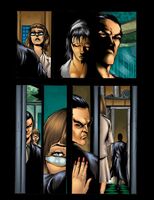 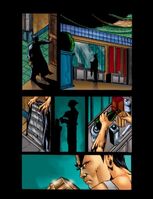 A seemingly stressed Kazuya decides to enjoy a drink in his office. 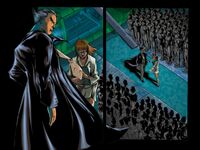 Kazuya, a unknown woman, and an army.