Following the conclusion of the King of Iron Fist Tournament 4, Heihachi Mishima defeated his son Kazuya Mishima and led him to Hon-Maru Temple, planning to let both Kazuya and his grandson, Jin Kazama, battle and steal their respective "Devil Genes". However, Jin defeats both of his predecessors and flies away, leaving the latter two unconscious. Shortly after, several Jack-4 robots invade the compound, programmed to take Heihachi's life. Initially, Kazuya and Heihachi fight the Jack-4s as a team, but eventually, Kazuya throws Heihachi across the room as soon as he notices that Heihachi is getting tired. Then, Kazuya turns into Devil Kazuya and escapes, leaving Heihachi to deal with the Jack-4s by himself. They quickly overwhelm him and self-destruct, leaving Heihachi seemingly dead.

The explosion, however, revives Heihachi's father Jinpachi Mishima from his 44-year slumber chained up beneath the Temple and proceeds to reclaim the Mishima Zaibatsu. A few months later, the King of Iron Fist Tournament 5 is announced. It turns out that Heihachi, in fact, survived the explosion, and now pledges to find out and "break the neck of the one who started this ridiculous tournament!".

The game follows exactly the same storyline as Tekken 5, only with the additions of two new characters and one returning character; Emilie "Lili" De Rochefort (who seeks to destroy the Mishima Zaibatsu and end her father's financial problem), Sergei Dragunov (a member of Spetsnaz who has been sent to capture Jin, particularly while he is in his Devil form) and Armor King II (after the death of the original Armor King between Tekken 3 and Tekken 4, this new Armor King resurface out of nowhere, with his identity and goals remain a mystery to the player).

Divine Fist is only achieved by successfully completing all of the league matches, survival tournaments and ranking tournaments in Tekken Dojo mode. The opportunity is offered once a promotion chance is offered sometime in the Heaven Dojo, the sixth stage in Tekken Dojo mode. Obviously, it is only offered when the player is ranked as a Dark Lord. In the European PSP version, the player's current character will be promoted from Dark Lord to Divine Fist, once they have completed all dojos, including the challenges, and then win the Heaven Dojo ranking tournament once again.

Another addition to Arcade Battle is that it now keeps track of the player's statistics. Each character has a clean slate once they begin playing Arcade Battle. During character selection, loading a match and battling an opponent, the player can see their alias, ranking, what region they hail from, their wins, losses and overall percentage.

Dark Resurrection also provided more tools for the players to Customize their characters. Also, the default colors for most of the characters were different from the original version of the game, despite the characters being shown in most of the FMVs and artwork of the PSP version in their original colors. For example, Paul's red judogi became white, Kuma's brown fur became white making him look like a polar bear, Jin's gauntlets, leg guards and flames on his pants became red, and Jinpachi's final boss look now appeared to be bursting into flames. None of these changes were absolute since the player could at anytime customize the characters back to their original colors, as long as they remember how they looked; with the exception of Jinpachi who isn't playable in the PSP version. Mokujin can now also be customized.

Tekken Dojo is a new mode in the PSP version. The player picks a character and battles a variety of Ghost characters in ranked battles. Doing well in League Tournaments improves the player's rank. After becoming the number one fighter in a single dojo, the player will acquire access to the next dojo. The difficulty increases the further the player progresses into the island. Also in the PSP version, Tekken Bowl Tournament returns; but now only referred to as Tekken Bowl.

List of moves by character that can be performed in Tekken 5. 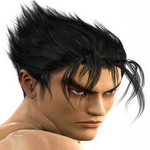 Online port for PS3 and PSP

The Playstation 3 version of Tekken 5: Dark Resurrection has many differences from its PlayStation Portable counterpart, mainly as the PS3 version is a port of the arcade version. The first major difference would be graphics equivalent to the arcade version and the option to play in 1080p. A few gameplay elements have been changed, starting with Jinpachi Mishima as a playable character after beating him in Arcade mode. Stages from original Tekken 5 are unlockable after beating PS3 game five times.

Also, item cost has been put into place, within most cases items costing half their price compared to the PSP version. Also, extra costumes are available from the start and do not need to be purchased.

The most significant addition is the new Online Mode. This mode allows the player to fight online with anyone in the player's continent (Europe, America, and Asia) with total and weekly rankings, fight money and title (Kyu, Dan, Tekken Lord etc.).

Like with most Online games, the player can either Quick join, Opti match (browse games with a similar level to his/her own), search for a custom one, or even host his/her own, changing specifications such as time and rounds. Rooms follow a winner-stays-on basis with 2-6 people, with/without headset chat (chosen by the host). One flaw of online play is that headset chat can slow the player's room, and only players in his/her continent can be played against (though the player can check foreign rankings).

The only other features missing are the Story mode, Ghost downloads, Tekken Dojo, Tekken Bowl, and a Customization screen (items and color changes are done within the character select screen, but can only be seen in-game). Though, survival and practice were added as an update. 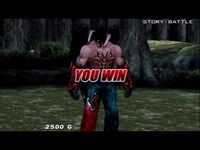