Tekken 6 (鉄拳6, Tekken Shikkusu?, lit. Iron Fist 6) is a fighting game developed and published by Namco. It is the sixth main installment in the Tekken franchise and the first multi-platform title. It was released in Japanese arcades on November 26, 2007 as the first game running on the PlayStation 3-based System 357 arcade board. The game received an update, subtitled Bloodline Rebellion, a year later. A home version based on the update was released for PlayStation 3, Xbox 360 and PlayStation Portable in late 2009. Compared to Tekken 5, notable changes in Tekken 6 were improved physics, the new Bound and Rage systems, and the Scenario Campaign mode (on PS3 and Xbox 360 only).

Following his victory in the previous tournament, Jin Kazama, the King of Iron Fist, has taken charge of the Mishima Zaibatsu and now appears to possess tyrannical ambitions. Using his resources within the organization to become a global superpower, he severs the Mishima Zaibatsu's national ties and openly declares war against all nations over the following year. This action plunges the world into an extremely chaotic spiral, with a huge-scale wars erupting around the globe and even amidst the space colonies orbiting the planet.

His biological father, Kazuya Mishima, is aware of this and finds Jin's interference in his own plans for global domination to be a nuisance. Now in charge of G Corporation, having usurped and taken over the company following its previous leaders' failure to use and then dispose of him, Kazuya is seen as the only force who could oppose Jin. He places a bounty on Jin's head for anyone who can capture him. Jin's response is to announce The King of Iron Fist Tournament 6 in order to battle Kazuya and crush G Corporation. Meanwhile, among the ranks of the Tekken Force, a young soldier named Lars Alexandersson has begun a rebellion. He leads a faction of Tekken Force in a coup against the Mishima Zaibatsu, establishing the rebel army Yggdrasil in order to put an end to its wars. During an operation, Lars stumbles across a young girl android identifying herself as Alisa Bosconovitch. The Tekken Force soon soon arrive to defend their base, which causes an explosion that kills almost everyone present at the scene and leaves Lars with amnesia. Lars escapes with Alisa and the two begin a journey to discover their origins, meeting and fighting several previous Tekken characters.

Jin, along with his top subordinates, Nina Williams and Eddy Gordo, are made aware of Lars' intentions and issue a manhunt for him. During his journey, Lars reunites with his lieutenant, Tougou, and the two keep in touch. Over the course of the story, Lars begins to gradually recover from his amnesia and remembers that he is the illegitimate son of Heihachi Mishima, who is living in solitude but still plotting to retake the Zaibatsu from his grandson, Jin.

After finding Heihachi's whereabouts, Lars confronts Heihachi and attempts to shoot him. Heihachi catches the bullet with his mouth. Lars relents and decides to leave, turning down Heihachi's proposal that they work together to defeat Jin. Lars eventually comes into contact with Lee Chaolan, who serves as an ally of Lars' cause after he had rescued Lee's friend, Julia Chang, who had been caught spying for Lee until she was discovered and imprisoned in a G Corporation facility.

Lars and Alisa's journey eventually leads them to G-Corporation, where they are confronted by a squadron of armed soldiers. Tougou and his men arrive to provide back-up for Lars while Lars and Alisa confront and defeat Anna Williams. Once they encounter Kazuya, they engage him in combat but are ultimately defeated and fail to apprehend him; resulting in his escape. Afterward, Lars and Alisa manage to escape, but Tougou is killed in battle, and Lars vows to avenge him. They then hijack a Zaibatsu subway train to get to the Mishima Zaibatsu's Central Tower, although they are ambushed along the way by Nina and a squadron of Tekken Force. Despite the odds, Lars defeats the soldiers and kicks Nina off the train. Nina later reappears having survived the fall but is again defeated by Lars.

Lars and Alisa reach the tower and confront Jin. They fight him but there is no victor. In a plot twist, Jin reboots Alisa's memory bank and sets her to attack Lars. Jin reveals that Alisa was built the whole time to protect him and that he has been using her to monitor Lars's actions, although the G Corporation attack was not part of Jin's plan. Lars fights and manages to defeat Alisa, who flees the scene. Raven suddenly arrives, having been tailing Lars and Alisa throughout their journey. Raven offers his help to Lars, as he knows where Jin will be heading next, which Lars accepts.

Lars and Raven locate an abandoned temple in the middle of the desert, said to be the home of the demon known as Azazel, or the Rectifier. Inside the temple, Lars and Raven find and confront Kazuya once again, the latter also learns, much to his disgust, that Lars is his half-brother.

After the fight, Kazuya leaves the temple. Lars and Raven reach the heart of the temple and locate Azazel. During the fight, Azazel tells Lars that he is merely a creation of man, and that it is time for him to destroy humanity to make them atone for their sins, but as he is too injured to continue fighting, Azazel apparently self-destructs. Lars and Raven flee the temple as it collapses.

Once outside, they are confronted by Jin once again, who sets Alisa on them. Lars Alexandersson and Raven defeat Alisa, who reverts to her old self and shares a brief, tearful reunion with Lars before expiring. Jin Kazama insults Alisa, enraging Lars and starting another fight. Lars fights him and defeats Jin in a rage.

Jin, gasping, finally reveals the real intentions behind his actions: having known about Azazel for a long time since Zafina's story, Jin knew that the only way to awaken Azazel was to fill the world with negative emotions, and the best way was starting a war. Jin also tells Lars that he never appreciated how the people of the world had to live under the oppressive rule of governments and greedy corporations, and by starting the war, those powers would crumble into nothing, and the world would finally see freedom and peace.

Jin also tells Lars that Azazel is not yet dead, and can only be destroyed by someone who carries the Devil Gene. Once the beast is defeated, Jin could kill his own inner demons by freeing himself from Gene. Azazel, now much stronger, suddenly erupts from the rubble, but Jin, powering himself up with the Devil Gene, approaches Azazel, immune to his attacks, and punches his fist straight through the beast's chest, sending the both of them plummeting to their apparent deaths. Lars tells Jin to stop but it is too late, and Jin is gone. Then, a bright beam of light shoots up, indicating that Azazel has died. Nina appears and shares a brief conversation with Lars, declaring that she cannot be the judge of whether Jin's actions were right or wrong. Lars and Raven take Alisa's body to Lee, who promises to repair her as soon as possible. Lars bids farewell to Raven. Lars then receives a call offering him a new job. The phone conversation is left a mystery to the player.

A post-credits scene shows that Raven and his colleagues at the UN have found Jin's half-buried body in the desert. The tattoo is still visible on Jin's arm, indicating that Azazel's demise has not freed Jin from the Devil Gene, and the events later continue into the next game.

A new gameplay feature in Tekken 6 called the "rage" system has been added, giving characters more damage per hit when their vitality is below a certain point. Once activated, a reddish energy aura appears around the character, and their health bar starts to flicker in red. The rage aura can be customized with different colors and effects to appear like fire, electricity, ice, among others.

Another gameplay feature added is the "bound" system. Every character has several moves that, when used on an opponent that is currently midair in a juggle combo, will cause the opponent to be smashed hard into the ground, bouncing them off the floor in a stunned state and leaving them vulnerable to another combo or additional attack. As of the Bloodline Rebellion update, successfully parrying a low attack will also put a character into a bound state.

Tekken 6 features bigger stages with more interactivity than its predecessors, such as featuring a new set of Stage Gimmicks where walls or floors can be broken to reveal extended fighting areas. It also has a large number of stages, almost four times more than Tekken 5 and more than double that of Tekken 2 that had the most before. The character customization feature has been enhanced, and certain items have implications in some aspects of gameplay.

The Online Modes are made up of Ranked Matches and Player Matches, a basis that has stayed on for TTT2 and Tekken 7. Ranked Matches is an online versus mode, where the player can promote their character to a higher ranking. Player Matches mode is also a versus mode, however the matches are not ranked and the player is free to play against an online opponent of choice.

In terms of gameplay changes, the damage calculations have also changed. Attacks on standing targets will now deal an additional 20% of damage and attacks on grounded targets will still deal a full 100%. The wall stun was also tweaked for this game, with wallspalts now causing characters to collapse on their back instead of falling forward like in previous games. Additionally, the combo scaling and distance would no longer reset if a character were to hit a wall before being resplatted unlike in Tekken 5.

The console versions (excluding the PSP version) also include an extra mode entitled "Scenario Campaign" which bears similarity to the "Tekken Force" and "Devil Within" modes from previous installments. In this mode, the player can move freely in an environment similar to that of a third-person role-playing game. Players can also pick up weapons such as poles and Gatling guns, along with lootable items, money, and power-ups which can be found inside crates that are scattered all throughout the playing environment. Players can move freely between fights, but when a group of enemies are encountered, the gameplay switches to the traditional, two-dimensional Tekken style. This mode originally only had single player offline. Namco released a patch on January 18, 2010, that allows online Co-op mode for Scenario Campaign. Both the PlayStation 3 and Xbox 360 versions of the game include an online versus multiplayer mode over PlayStation Network and Xbox Live respectively.

List of moves by character that can be performed. 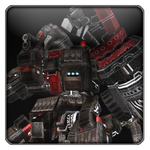 Anger of the Earth

The Tekken 6 Soundtrack was released on December 9, 2009, including both arcade and console music.

Tekken 6 Gameplay part 1
A sample of gameplay with Devil Jin. 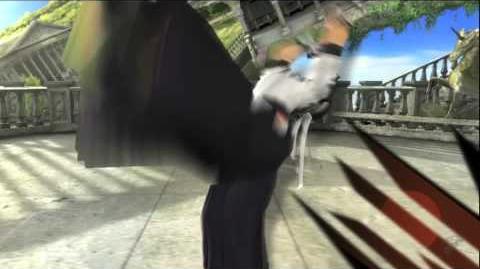 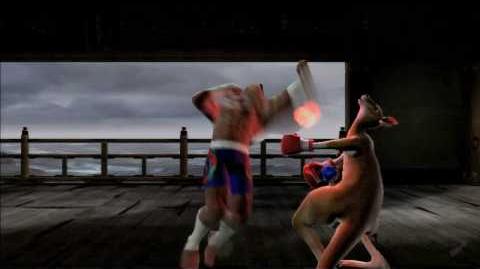 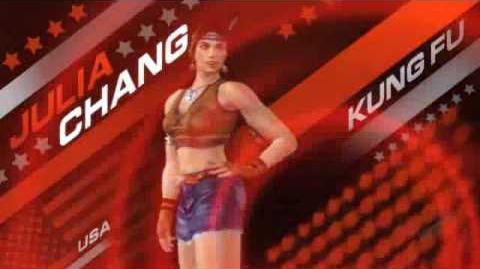 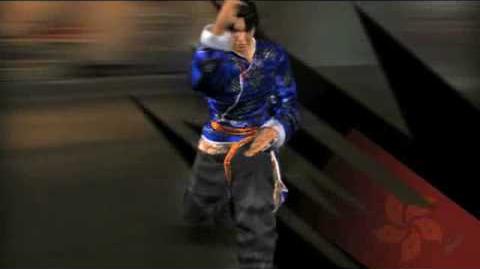 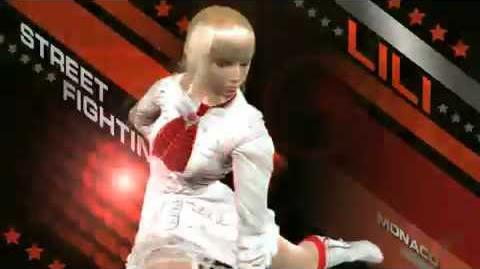 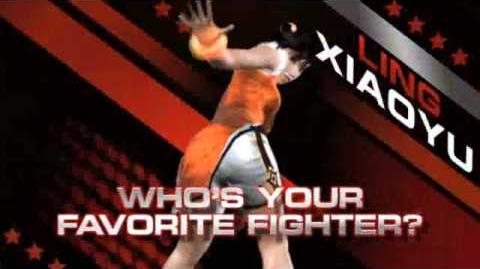 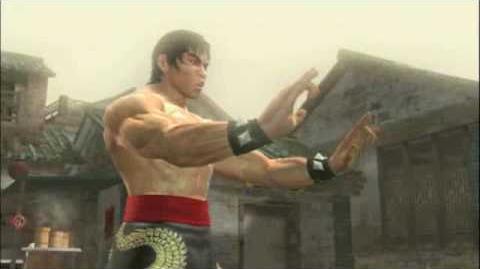 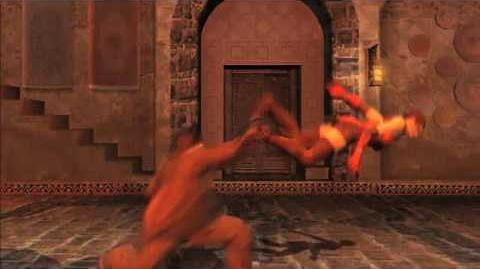 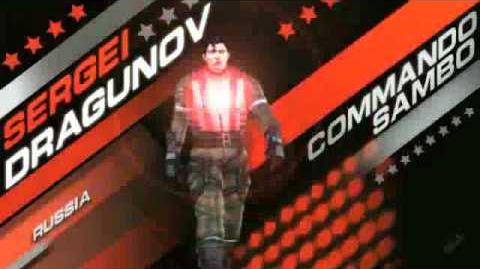 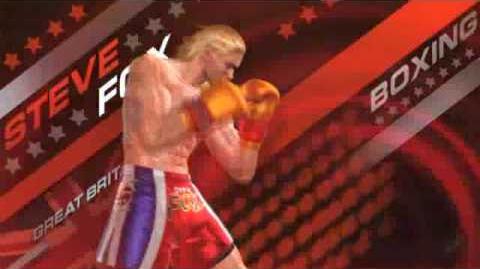 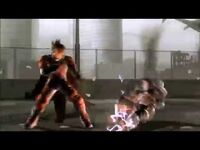