This update also reveals new default outfits for many characters such as Asuka Kazama, Sergei Dragunov, Bryan Fury, Lili and Ling Xiaoyu. Indeed, the fans had long called for new outfits for the characters, some of whom had the same since Tekken 5. The characters have new intros and interact with objects (ex: Lili is holding a cup of tea, Asuka arrives by bike, Bryan is swinging a beam on the screen).

New stages were also unveiled. In addition to these additions, some have been enhanced with new brightness and changes in the décor.

On February 12, 2016, the Location Test for this update was launched, to observe the new mechanics of the game, as well as the two characters recently announced: Akuma and Nina Williams. Bob was then announced and became playable during the update on August 9, 2016. Master Raven, a new character, was also announced to be added to the September 15, 2016 update.

An update of the arcade version Fated Retribution was announced on the occasion of MASTERCUP.10, October 20, 2018. It was officially released on arcade in February 2019.

This new version is supposed to add the additional content of the console versions. Thus, we find the characters of the first Season Pass: Noctis Lucis Caelum and Geese Howard with their respective stages. There are also the first four playable characters of the second Season Pass: Anna Williams, Lei Wulong, Craig Marduk and Armor King. Julia Chang also becomes available later on February 28, 2019. However, the Season 2’s DLC guest character Negan is somehow excluded from this arcade version.

It was announced at the EVO 2019 finals, that Zafina would be making a return and the introduction of a new character by the name of Leroy Smith would be featured in the Season Pass 3.

At the Tekken World Tour 2019, it was announced the return of Ganryu and a new character named Fahkumram will also join the lineup.

The Season Pass 4 was announced at the Japan streaming Fighting Game Publishers Roundtable in August 2020. This Season Pass includes 2 characters as well as 2 new stages. The purchase of Season Pass 4 allows the player to obtain new customizations and customizations for the player with the image of Pac-Man. It features the new character Kunimitsu and the stage Vermilion Gates. Lidia Sobieska and the stage Island Paradise were later released in April 2021. 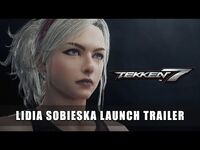