Tekken Forever is a comic book published by Image Comics, that only made it to the first issue before being cancelled. It focused on the Kazama family, as well as the character Unknown.

The presence of Jin Kazama's scar and of Unknown herself places the time at roughly between Tekken 3 and Tekken 4.

The plot is not canonical.

The plot opens in Ogre's Temple with the presumed dead Kazuya Mishima standing in the midst of many fighters from the Tekken universe lying unconscious on the ground. Even though he enjoys the view, Kazuya asks Bruce Irvin, his bodyguard, to stop having fun at the scene they are looking at. Only Jin Kazama is conscious and holds Unknown's body in his arms, reflecting on the knowledge he knows about her but also about himself. Ganryu is also present and Bruce gets annoyed that Kazuya has defeated all the fighters alone and wonder why they are even there.

Jin puts Unknown's body down, telling her that she deserves to rest. He then insults Kazuya and his men and then says he's going to put a stop to them. Bruce and Ganryu block his way, but Jin attacks them. He thinks about the truth he just found out about Unknown and how he doesn't want to lose her or anyone close to him. He asks his opponents to leave him in peace. In response, Bruce asks Kazuya what they are allowed to do with Jin. Kazuya retorts that they can do whatever they want with him, but if possible to kill him. A fight begins between Jin and Ganryu, won by Jin. Then comes Bruce's turn, who compares him to his father. Jin defeats him and replies that he is nothing like Kazuya. Once the clash is over, he points his finger at his father and threatens that he is next.

Lei Wulong, is commissioned by Interpol to arrest Kazuya and tries to enter the temple where he is. Thanks to Gun Jack accompanying him, Lei manages to enter the temple with a gun in his hands. He comes face to face with Bryan Fury who is about to kill a soldier. Bryan asks him if he remembers him. Lei asks him to release the soldier in exchange for which he will let him go. 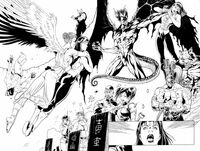 Jin fighting Ogre in a forest.