Tekken Pachislot is a slot machine game developed by Bandai Namco Games and Yamasa. It was first released in 2004 and three further versions of it have since been released. It is only available in Japan. A number of pachislot endings were made available in the Tekken 7 gallery.

Many of the pachislot movies are interactive, with differing endings depending on the players success at the game - a failure will show the main character losing in some capacity, whilst a win will progress the story to the next scene.

Alongside the Tekken pachislot games, two pachinko games have also been released.

A pachinko (パチンコ) machine is a mix between a slot machine and a pinball machine. Pachinko originates in Japan, where is extremely popular, generating a vast amount of revenue by utilising gambling loopholes in Japanese law. The word pachinko comes from the onomatopoeia "pachi-pachi" which is the sound objects make when colliding with each other.

The pachislot (パチスロ pachisuro in Japanese) is a slot machine whose name comes from "pachinko" and "slot machine". It is a descendant of pachinko. It is very popular in Japan and pachislot machines generate a lot of revenue, placing it in third place in the leisure economy.

The pachislot game starts by chips being placed. The player then scrolls through several reels with symbols on them, each independently controlled. The player must press a button under each roller to stop scrolling. Based on the results obtained, the player can then earn tokens, which can be exchanged for prizes.

In Tekken Pachislot, it is possible to attend original cinematic scenes related to the Tekken universe. If the player cannot align the requested symbols, it is also be possible to observe a scene that will end in a negative way. It also features unpublished CGs of the characters in the game.

Tekken Pachislot (パチスロ 鉄拳) was the first game released in 2004 in Japan. Jin Kazama, Ling Xiaoyu and King II are the three characters the player can select. There are various modes such as Multi-Roulette, Battle, Heihachi slot, Tekken Bowl, Tekken Chance and Tekken RUSH. Through these different game modes, characters can battle enemies such as Devil and Unknown.

The character models used in the game cinematics come from the first Tekken Tag Tournament. It is thus possible to find stage decorations from the same game.

Tekken Pachislot 2nd (パチスロ 鉄拳2nd) is the second game released in Japan in May 2013. Lars Alexandersson, Asuka Kazama and King are the playable characters. The modes present in the first pachislot are available again. The character models in this game use cinematics from Tekken 6. There are also Tekken 6 stages available in the game, such as Urban War Zone, Fallen Colony and Gargoyle's Perch. All characters in the game have Japanese dub voices.

Tekken Pachislot 3rd (パチスロ 鉄拳3rd) was the third game released in Japan in September 2014. In this game, the characters are in a team, like Tekken Tag Tournament 2, which the game cinematics come from. The playable teams are Jin Kazama & Nina Williams, Ling Xiaoyu & Alisa Bosconovitch, as well as King II & Jaycee. There are usual modes present that were in previous Tekken pachislots like Tekken Chance and Tekken RUSH. New modes appear such as God Tekken RUSH. The mode features the appearance of Angel, and a Head-Butting Combo where Heihachi Mishima shatters his head against the screen. Also new modes like Tekken Attack, Ogre Challenge, Unknown Zone and Devil Battle were added.

Tekken Pachislot 4 (パチスロ 鉄拳4) is the fourth slot game released in Japan in July 2019. The character models are based on Tekken 7. In this game, as well as many mini-games from previous pachislot games, two storylines are playable, one focusing on Claudio Serafino and Ling Xiaoyu (Sirius Side),[1] and the other following Lars Alexandersson and Alisa Bosconovitch (Yggdrasil Side).[2] A Devil Version of the machine was released July 7 2021.[3] This version focuses on Devil Kazuya, Devil Kazumi, and Devil Jin, with the characters featuring on the new pachislot machines and with old and new minigames featuring the devil characters.

Pachislot Machine for the Devil Version of Pachislot 4

Pachislot Tekken 5 (パチスロ鉄拳5) is a forthcoming slot game, the fifth in the Tekken series, set to be released in Japan in July 2022.[4] The slot machine was first teased on April 8th 2022 by the company that made it, in a Twitter competition celebrating the new model of pachinko machine that the game has been built on.[5]

Pachislot Tekken 5 will feature four main stages: Xiaoyu Stage, King Stage, Paul Stage, and Jin Stage.[6] Whilst the game predominantly draws on visuals from Tekken 7 it will feature some new scenes, though, as with previous pachislot games, these are unlikely to reflect a contribution to the Tekken canon.

Tekken CR (鉄拳CR) is a pachinko machine game released in January 2014. The goal is to move a ball by operating the joystick and then the player has to juggle the shooting speed to get the ball into holes. This will activate a system similar to slot machines. If three symbols are identical, a certain number of marbles can be won according to points earned based on the presented symbols.

Just like pachislot, the game features cinematic scenes related to the Tekken universe and a number of unpublished CGs of the characters. If the player aligns the symbols incorrectly, a negative scene will appear. For an example, one of the scenes has Devil Kazuya capturing Asuka and throwing her off the top of a skyscraper in front of Jin, who jumps off on his motorcycle to rescue her. If the player fails to align the symbols, both Jin and Asuka get hit by Kazuya's laser beam attacks and plummet to their deaths. If the player succeeds, Jin does catch Asuka and they land safely on the ground.

Tekken Kiwami (鉄拳 極) or Tekken Extreme is a pachinko machine game released in August 2019, using Tekken 7 character models, much like Tekken Pachislot 4.[7] Like Tekken CR, it operates through the use of joystick and pinballs. The joystick in this instance is modeled after Jin Kazama's glove. The game features numerous cinematics and endings focussing on different characters. One ending features a version of the Tekken 3 story, with Heihachi Mishima and his Tekken Force gunning down Jin, who then awakens into his devil form. This version of the Tekken 3 events is notable for showing Jin in human form defeating True Ogre,[8] in keeping with the original Tekken 3 story, though counter to the recap shown in the Tekken 6 Mishima Story, which depicted him transforming during his Ogre battle. Another pachinko ending features Kazuya and his G Corporation soldiers on the Millennium Tower helipad, gunning down giant mecha Heihachis. Another ending features Kazumi Mishima, utilizing footage from her trailer and re-enacting her battle with Heihachi in the Mishima Dojo.[9] 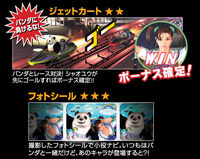 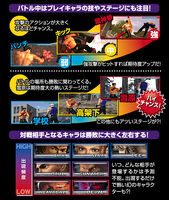 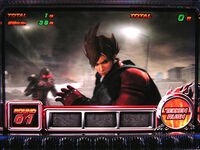 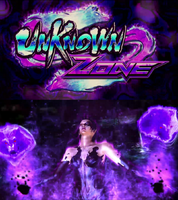 Alisa and Lili and Xiaoyu 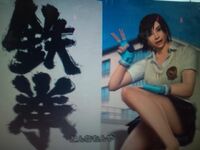 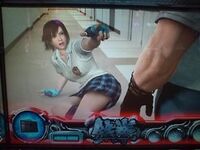 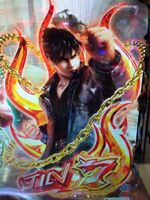 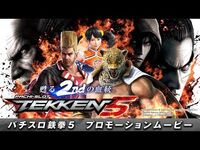