Tekken Pachislot 4 (パチスロ 鉄拳4, Tekken Pachislot 4?) is the fourth Tekken themed pachislot game. It was released in Japan in July 21, 2019, and exclusively appears in Japanese arcades.[1] The character models are based on Tekken 7, and many animations and voice lines are borrowed from the game. In Pachislot 4, many mini-games from previous pachislot games, as well as two storylines, are playable. One storyline focusses on Claudio Serafino and Ling Xiaoyu (Sirius Side),[2] and the other follows Lars Alexandersson, Alisa Bosconovitch and Lee Chaolan (Yggdrasil Side).[3]

A Devil Version (パチスロ鉄拳４デビルVer., Devil Version?) of Pachislot 4 was released on July 7 2021.[4] The version has cosmetic and minigame differences, and some missions with Devil Kazuya.

All characters in the cinematics speak in Japanese, given that the game is excusive to Japan. While the Sirius story picks up right after the end of Claudio and Xiaoyu's Tekken 7 endings, the Yggdrasil story occurs during the events of Tekken 7, as Heihachi Mishima is still the head of the Mishima Zaibatsu.

The game has no set story, since events vary depending on how well the player plays the game and by chance. Failures at certain points in the game will reset the scene, cause a mini-game over, cause a large game over, or cause the story to switch to the other storyline or to a minigame. The overarching story, however, can be followed by successes that move the story forward at key points in the game.

As a spin-off game, it is likely that stories that occur in Pachislot 4 are non-canonical. There are however a number of indicators suggesting that the stories in the game may be canon. Claudio and Xiaoyu's story picks up immediately after both of their Tekken 7 endings which were left on a cliffhanger. Pachislot 4 thus resolves the story left hanging in these endings. Meanwhile, Lars, Alisa and Lee's story fits within the events of Tekken 7, making references to events such as Kazuya shooting down the Mishima Zaibatsu's Orbital Laser Satellite, and depicting the actions of Lars and his rebel army in the scenes in which they are off stage in Tekken 7 story mode.

Tekken Pachislot 4's machine has three different screens, one main screen and two side screens that curve round to form a panorama view for the player. Sometimes cut scenes will spread across all three screens, though more often, the side screens will be used for auxiliary information. For example, all Lars's radio calls will come up on the left side screen, showing the caller's face and subtitling their dialogue there, whilst the main screen will show Lars in situ going about his tasks. Beneath the screens are three reals with images on and a button beneath each one, that the player presses to stop each reel in order to try and align the icons on them.

Xiaoyu and Claudio walk in Duomo di Sirio, and at some point, Claudio exorcises someone using his Rage Art. A purple skull hovers above the person being exorcised, and Claudio shoots the skull/evil spirit, causing it to be banished. Claudio then checks on the exorcised person to make sure they are alright. Eliza also makes an appearance - she has been preying on victims in the city. Claudio and Xiaoyu have a confrontation with her in which Claudio again uses his rage art, presumably to banish her as an evil being. The story properly picks up when we see Claudio walking in a library. He opens a book that shows silhouettes of devil-like figures resembling Kazuya and Jin's devil forms with a laser shooting out of the forehead of one. A voice over of Claudio says: "When the Devil descends to the land, it will bring destruction to the world."

Claudio and Xiaoyu travel to Jungle Outpost, where they find the entrance to some ancient ruins that bear a resemblance to an older Tekken stage.[5] Panda charges into blocked up ruins and opens the way for them. Claudio and Xiaoyu enter the ruins, which are lit by torchlight. They come across Devil Jin who releases a laser towards the roof. Xiaoyu calls out to him but he does not recognize them. Xiaoyu goes to Jin and holds his face, begging him to snap out of it but Jin knocks her back. Claudio then attacks Jin, and succeeds in getting a few hits in before Jin disappears. Claudio and Xiaoyu look around in confusion. Xiaoyu warns Claudio as Devil Jin swoops down to attack them. Claudio dodges Jin and is able to land a hit on him, he thanks Xiaoyu for the warning. Claudio and Jin clash again, but this time Claudio uses his Sirius Purification Sorcery to conjure a bow, and draws it to shoot Jin with an arrow of light. The arrow hits Jin and he collapses to the floor. Claudio says "May the light of Sirius extinguish the shadows!"

An alternative ending occurs in which Claudio is knocked out and Xiaoyu runs to his side, and then turns angrily to Devil Jin. She attacks him with two hand strikes, but Jin dodges the first strike and blocks the second strike. Instead of striking her back, Jin has a flashback of different images of Xiaoyu smiling. He seems to remember her, because his claws pause and do not hit her. Xiaoyu then takes advantage of the situation, and knocks Jin out, saying "Jin, I won't trouble you any more".[6]

Lars and Alisa are wandering the Souq. They are in radio contact with Lee Chaolan and Olivia, and are looking for evidence of suspicious persons and Mishima Zaibatsu activity in the area. During this time, Alisa looks at various wares for sale and there can be a chase with Lars and a thief. Lars speaks to various informants in the area, who can tell him either to be careful of Bryan Fury, that Tekken Force soldiers have occupied a town, that a location is being used as a base for Zaibatsu operations, or that Nina is involved in a trap. Lars receives information from Lee that the Mishima Zaibatsu are on the move, and Lars tells him to use force to stop them, Lee expresses his reluctance to get involved in anything rough. Olivia radios Lars to inform him that the Zaibatsu have started a battle in Manhattan. He tells her to go to the location and survey it.

The next part of the story takes place in Twilight Conflict. Lars and Alisa find the place to be the site of a ruined battlefield. They come across a cracked helmet belonging to a G-Corp guard and an unfired gun, suggesting that the Zaibatsu easily won the conflict there. They can be warned by Olivia that a G-Corp helicopter is inbound, and Lars and Alisa have to fend it off, with Alisa attacking it in a similar way to the helicopter she brings down in Tekken 6′s Scenario Campaign mode. Lars and Alisa later navigate passed the Zaibatsu's Tekken Force who are patrolling this area. They are spotted and have to engage them, though they can hear that Tekken Force are being pressured by G-Corp forces elsewhere. Olivia radios Lars to tell him that Heihachi has appeared in the Mishima Building.

The next scene is a calm city at night. Lee joins the duo for this and all subsequent scenes. Lee informs them to be wary of the Zaibatsu's tactics. Lee asks Lars how he feels about breaking into the Mishima Zaibatsu building where he used to work and Lars tells him it means nothing to him now. Alisa asks Lars whether this will all be over soon, and Lars replies yes but they first have to stop this war. Lee also tells Lars he's glad Lars has his back, and Lars replies that he's counting on him. Olivia radios in to say the time has come, and thanks them all for what they've done.

Lars and his Yggdrasil Force storm the Zaibatsu, driving an armored car through the blockade of Tekken Force soldiers in front of the Mishima Building. As Lars gets out the vehicle he looks up at the Mishima Zaibatsu and announces that he is coming for Heihachi. Lars, Alisa, and Lee fight through Tekken Force soldiers guarding the Zaibatsu until they are able to get to an elevator. At the top of the elevator, they fight Nina.[7] Lee can interrupt this fight to throw a rose that distracts Nina. The scene ends when Lars defeats Nina and demands to know where Heihachi is.[8] It is possible to get a rare alternate ending where Kuma instead appears in Tekken Force armor alongside Tekken Force soldiers. Lars must defeat Kuma in a similar fashion to Nina to win the game.[9]

At a random point within the story, it is possible for the screen to go black and to cut to Heihachi. He is sitting in his black gi meditating at Dragon's Nest. Tekken Force guards approach him and tell him they are ready.[10]

It begins with a version of the Tekken 7 final fight between Heihachi and Kazuya, where the player must fight as Kazuya and beat Heihachi in three rounds by aligning the slots correctly. If the player does so, they may unlock an "Apocalypse Stage" where Kazuya fights hoards of flying gargoyle demons, before having to flee the magma of the volcano stage. After this, there is a "Void Stage" Where Devil Kazuya flies before a blood red moon in space. He must destroy glowing purple asteroids by using his devil laser.

Olivia radios Lars at the Souq.

Claudio speaks with a possessed person in Duomo di Sirio.

Claudio kneels next to the exorcised boy whilst the Marksmen of Sirius look on.

Claudio's Rage Art being used to exorcise a devil. 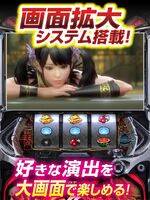 Pachislot Machine for the Devil Version of Pachislot 4.

Devil Kazuya in the Devil Version of Pachislot 4.