Tekken Revolution (鉄拳レボリューション, Tekken Reboryūshon?, lit. Iron Fist Revolution) was a free-to-play downloadable fighting game on the PlayStation Network, exclusively released for PlayStation 3 in June 2013. It has been praised for bringing back the arcade experience to the console. It also features many similar aspects with role-playing games and social games. Bandai Namco revealed that it and its downloadable content would be removed from the PlayStation Store on January 21st, 2017. The game officially ceased operations on March 20th, 2017.

The Bound system introduced in Tekken 6 has been removed and as a consequence, combos utilizing that mechanic have become obsolete. However, the ability to temporarily stagger the opponent still remains but has been limited to certain strings landing when not already in a combo state, or from floor breaks.

The Rage system from Tekken 6 has returned, gaining increased damage when the player's health gauge is low.

Tekken Revolution is the first in the series to include a micromanagement type system akin to that of a role-playing game. This new gameplay mechanic consists of allocating Skill Points to either one of three stats; Power, Endurance or Vigor:

This mechanic provides a major added play incentive but tends to unbalance matches by favoring players who have grinded out their character's stats their most, regardless of their skill.

In addition to this, Reset Drinks are available to reset any character's stats back to zero. Any fight'''' money spent on points are refunded.  The first reset is free and additional reset drinks are purchasable via the PlayStation Store. One Reset drinks will cost 5 pounds (6.52 USD).

Arcade Mode in Tekken Revolution is very similar to that of previous titles. There are 8 total stages with 2 rounds each. The 8th stage being a Boss fight and 7th stage being a sub-boss fight. The player is awarded fight money and gift points upon winning the stages.

There are 3 difficultly settings:

Online VS -  The Online mode in Tekken Revolution is very similar to Tekken Tag Tournament 2; with the exception of being able to enable/disable Character Enhancement.

Warm-up Space - Practice indefinitely without coin consumption. (Wall-Off or Wall) stages may be selected. Command Lists are available with command display. Only freestyle mode is available and the training dummy is Mokujin.

Mokujin Rush - A limited time event mode and brand new to the Tekken series. Consumes 1 Mokujin Ticket. Players may also expend their Premium tickets/coins to enter this mode. Fight constantly spawning Mokujins (Mokujin, Tetsujin, Kinjin). There are 8 stages in total with 2 rounds each. In the 7th stage, Tetsujin is always fought and in the 8th stage, Kinjin is guaranteed to spawn. Rewards increase with consecutive victories. After the version 1.03 update, the number of matches has been reduced to 3.

In celebration of the version 1.03 update, a Mokujin Festival event was held introducing a new gameplay mechanic. A turbo mode, similar to that of the Street Fighter series, was added. Essentially, gameplay speed has been increased dramatically. However, this was only limited to the Mokujin Rush mode. It occurs randomly whenever a player enters the Mokujin Rush mode.

Players also have a level associated with their account. The higher their level, the more points they can allocate to their characters. The player starts off with 4 Skill Points and is awarded 4 Skill Points per level for each character. For example, a level 10 player will have 40 total skill points and may allocate up to 40 skill points to each character. However, there is another mechanic called Fight Money that limits how many skill points a player can allocate at a time. Each skill point costs a certain amount of G(Gold) and the cost gradually increases with each stat point.  Players can increase their level by gaining experience points in either Arcade or Online Battle. The current level cap is 80.

Tekken Revolution sets itself apart from many of the other console releases in the series with the implementation of microtransactions that affect duration of play time:

Coin Priority - By default, free coins are given priority. However, after the version 1.02 update, the player can select between free coin or premium coins/tickets by pressing R1 at the main menu.

Like many online social games, there is a reward for consecutively logging in daily.  With each day logged in, the player is awarded with gift points, fight money, and premium tickets. The amount of reward varies with how many consecutive days logged in. As of the update to version 1.03, an additional daily bonus is given for using premium coins/tickets.

Characters are unlocked by via Gift Points. Gift Points are awarded by playing in Online VS (regardless of victory), Arcade and login bonuses. When a player accumulates enough gift points, a random character is unlocked. All characters can be unlocked via this method with the exception of Eliza.

Time-release Characters - Characters are released slowly into the roster via version updates. This is reminiscent of the arcade releases and was implemented so that new players won't be overwhelmed by the huge roster that Tekken carries.

Quick access to the PlayStation Store is available via the main menu screen.


The following are purchasable items via the PlayStation Store:

Events are frequent occurrences in Tekken Revolution. Event schedules are displayed on a noticeboard upon logging into the game or in the top right-hand corner of  the Main Menu screen. The noticeboard can be reopened by pressing Triangle on the main menu screen. Events usually occur when there is a major update or something significant to celebrate. Events give increased rewards by adding multipliers to gift points, fight money and/or experience points. Past events include the 1,000,000 download event and Launch event (Jumpstarter).

Tekken Revolution also has been criticized mostly because of the online community. Hackers abuse the stats, often setting their stats to an unsettable number, while very rarely, setting them to 200. The opposing player can also quit when they are about to lose - not letting the opposing player knockout them to guarantee a win. 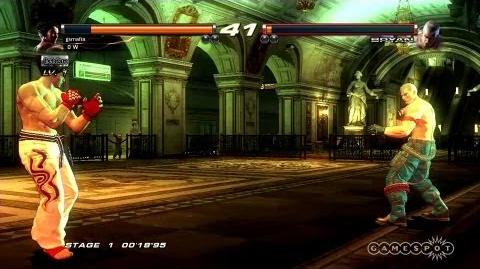 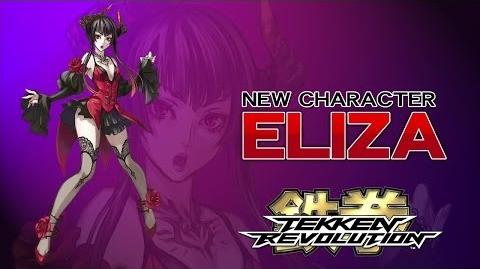