The list below indicates how many hits the life bar must take before it starts to flash, indicating that rage (Netsu) mode has been triggered for the inactive character. The effect remains active for 3 seconds.

Netsu Power is the temporary state the player's selected player is in when the lifebar outline is flashing red. It is also known as the Anger Power, because it activates when your on screen character gets hit a set number of times and the off screen characters gets angry. The number of hits required for the Netsu activation depends on which characters are teamed up.

Below is a list of the number of hits it requires for the Netsu Power Up to start. It does not matter what kind of hit it is, mid air juggle hits, unblockables, special moves or a plain and simple jab all count as a hit.[1]

The following chart shows the character relationships of each fighter that has an impact on when a character will get enraged from seeing their partner getting hurt in battle.

A final column is included noting which characters have special win poses together. These do not affect Netsu data. Netsu data shows stats relevant to the game and should not be altered.

Kazuya and Heihachi (or Jin)

Hwoarang and Eddy (or Tiger) 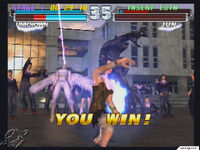