Urban Jungle is a stage in Tekken 5. The stage is a noticeably urban environment where men that are kept away from the fighters by many metal bars cheer the fighters on.

There are many speakers seen stacked on top of one another and a yellow DJ can be seen providing the music. Vehicles such as three white vans, two of which is seen suspended by ropes, are also in the background. The vehicles' headlights are on and shine brightly. Also, the lighting is dimly lit as the headlights of the vehicles' provide little light.

Characters with interludes here are:

The stage BGM is titled "Unforgiven". 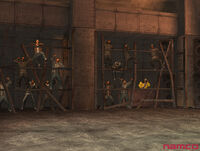 The cheering men are seen hanging onto the gate and eagerly shouting. 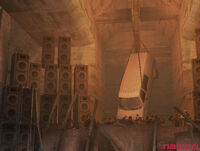 One white van seen hanging suspended by rope alongside stacks of speakers.

Xiaoyu taunting in one of her opening poses.